Ludovic Geilich took the bull by the horns in Marbella yesterday and dominated the final table of the UKIPT Main Event for his first major live poker victory. 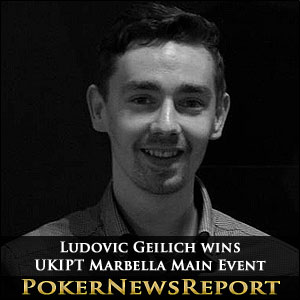 The Scottish/German poker player – whose previous best live recorded cash was at the GukPT in Walsall 2008 – admitted in an interview for PokerStars prior to the final table that his recipe for success in Marbella had been very little sleep and aggressive play.

Despite partying at Marbella´s Ocean Club until dawn, Ludovic Geilich took a huge chip advantage to the final table, courtesy of a fortunate hand on Saturday evening which saw the demise of Moris Yalcin (A♦ 3♣ > A♣ A♠ – Geilich caught the 3♠ on the Flop and River to make Trip Threes).

Geilich held a 32 Big Blinds advantage over second placed Kamil Hrabia as the players took their seats at the Andalucia Plaza Hotel for the climax of the UKIPT Marbella Main Event and he continued to boss the tournament from the very first hand.

Just a few minutes remained in Level 25 of the UKIPT Marbella Main Event (blinds 20,000/40,000 – ante 10,000) when the cards were first dealt for the climax of the tournament, and straight away Ludovic Geilich was involved in the action – moving all-in on a board of J♠ 2♦ 8♦ / J♦ and forcing an open fold from Jorge Eguaras Paniagua (Q♦ Q♣).

Several hands later, Geilich was again (figuratively) pushing his stack into the middle of the table and forcing a fold out of Asier Crespo and then the chip leader took his first scalp of the afternoon when Fernando Curto moved all-in with 6♦ 6♥ and ran straight into Geilich´s A♣ A♠. With no two-outer to help Curto, he was bust from the table in eighth.

Crespo Gets his Revenge as Players Start to Tumble

The following two levels saw four players sent to the packed rail, but not before Asier Crespo had gained his revenge for being forced out of the earlier pot by doubling up against Geilich K♣ J♠ > A♠ 9♠ when spiking the J♣ on the River after Geilich had paired his 9♠ on the Turn.

Pablo Rojas eliminated Jorge Eguaras Paniagua in seventh (A♦ 3♦ > 9♣ 8♠) when turning a straight and, in the next hand, Kamil Hrabia (A♥ 9♥) called Jonatan Soderstrom´s K♥ 8♠ shove from under-the-gun and paired his Ace on the flop to bust the Swede in sixth.

Ludovic Geilich (5♥ 5♦) moved further ahead of the field when turning a set to eliminate Lucas Blanco (A♣ Q♦) in fifth, and the game very quickly developed into a three-handed event when Asier Crespo´s A♥ Q♠ failed to improve against Kamil Hrabia´s pocket Queens, and he was gone in fourth.

Geilich Wobbles but Bounces Back with Audacity

As the play went three-handed, the remaining players settled on a deal which tied up the following amounts for each of the players and left a further €14,000 and the UKIPT Marbella title to play for.

Following the deal, Ludovic Geilich´s dominance of the UKIPT Marbella wobbled as he chipped up both his opponents. First he slid a total of 1.2 million chips in the direction of Kamil Hrabia who had flopped a set of Sixes against Geilich´s unseen hand, and then the chip leader doubled up Pablo Rojas A♣ J♣ > A♠ 5♠ when the Spaniard hit a the J♥ on the flop and Geilich missed his Spade flush draw.

However, Ludovic Geilich was not going to lie down quietly and, on a board of Q♦ 6♣ 3♠ / 8♦, the German forced a fold from Hrabia and captured 1.8 million of the Pole´s chips before proudly holding aloft 7♦ 2♠. Being the victim of the ultimate bluff may or may not have led to Kamil Hrabia´s downfall, but he was gone from the tournament in third just a few hands later when his last 15 Big Blinds went into the middle with K♣ Q♣ only to run into Pablo Rojas´ A♠ A♦.

Pablo in Pain as Geilich Gets the Glory

Despite Pablo Rojas and Ludovic Geilich going into the heads-up climax of the UKIPT Marbella Main Event practically level in chips, Geilich was soon dominating proceedings once again. In the first hand of the heads-up, the German´s shove in response to Rojas river bet forced the Spaniard out of the pot and gave Geilich an almost 3:1 chip advantage.

Rojas was not about to deflate Spanish hopes of the first home victory in a major live poker event since (see below) and through Levels 30 and 31 he battled gamely to keep tabs on the chip leader. However, at the start of Level 32 (blinds now 100K/200K), Geilich took eight of ten hands to reduce the Spaniard to his last ten big blinds and the victory was in sight for Geilich.

When victory came it was dramatic. Geilich tabled 9♠ 9♦ in response to Rojas´ shove with Q♠ J♣. The flop of K♣ 10♦ 10♣ gave Rojas multiple outs and increased the electric atmosphere on the rail to stratospheric levels.

The 3♠ on the Turn did nothing to quell the home support, but it was the German and Scottish supporters that gave the loudest roar when the 8♥ was dealt on the River to eliminate Pablo Rojas in second and crown Ludovic Geilich as champion of the first UKIPT event to be played in Spain.

There is definitely a theme developing in major Spanish live poker tournaments. Players from Spain accounted for almost 50 percent of the entries in this tournament, the recent WPT Barcelona Main Event and last year´s EPT Barcelona.

After a dreadful start, the Spanish tend to come strong in the latter couple of days and – as with the UKIPT Marbella – have the majority as a nationality at the final table. Yet no Spanish poker player has won a major live poker event on home soil since … …. (we went back to 2007 and are still looking!).