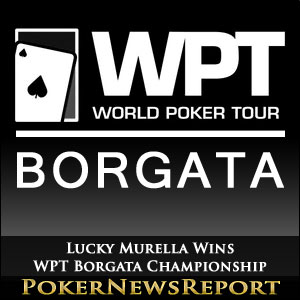 In Friday´s PokerNewsReport, we mentioned how amateur poker player Anthony Murella had ridden his luck to advance to the final table of the WPT Borgata Winter Poker Open Championship. However, the good fortune that Murella had encountered on the penultimate day of the tournament turned out to be just a forerunner of the luck he was to enjoy when the final table got underway.

When the remaining six players took their seats at the Borgata Poker Rooms, few would have predicted the eventual winner based on Murella´s position in the chip counts and at the table. With just under an hour left in Level 31 (blinds 50,000/100,000 – ante 15,000), Murella had 34 big blinds to play with, but was sandwiched between the two chip leaders David Paredes and Anthony Maio.

Paredes Off to a Flyer – Merulla Wins Sensational Hand

The start of the WPT Borgata Championship final table was explosive. Both Farid Jattin and Vladislav Mezheritsky had moved all-in during the first orbit of the button without receiving any takers. David Paredes took a few small pots with min-raises, and one huge one worth 5.8 million chips when he moved all-in on a flop of K♥ 8♦ 2♠ following a bet of 1.88 million chips by Farid Jattin. Jattin let the pot go and Paredes was all of a sudden up to 14 million chips.

The most explosive hand happened during the second orbit of the button, after Jared Jaffee had raised from middle position to 225,000 chips, Anthony Merulla re-raised from the button to 595,000 chips, Farid Jattin increased the bet from the Big Blind to 1,125,000 chips and Jaffee moved all-in for 5,505,000 chips. Merulla and Jattin both made the call – both putting their tournament lives at risk – and the cards were on their backs.

Farid Jattin was 66% favourite pre-flop to win the hand and triple up – odds which improved to 75% after the flop of 9♦ 7♦ 5♥. Incredibly, the 10♦ was dealt on the Turn, meaning that Jared Jaffee´s pair of Tens improved to a Set, and the most likely outcome of the hand was now the dual elimination of Anthony Merulla and Farid Jattin. However, the drama had not yet finished, and the A♦ on the River completed Merulla´s flush – sending Farid Jattin to the rail in sixth place and reducing Jaffee´s stack to just 1.5 million.

Mezheritsky and Jaffee Bust – Final Table Down to Three

The game was still in its first level of the day when it was reduced to just four players. Vladislav Mezheritsky was unlucky to be bust out of the tournament after moving all-in with A♣ K♥, getting a call from David Paredes (J♥ J♠), and pairing his Ace on the flop of A♦ J♣ 7♥. Unfortunately for Mezheritsky, Paredes’ pair of Jacks had improved to a set and, with no help from the Turn (2♦) or River (Q♠), Mezheritsky was eliminated in fifth place.

Moments later he was followed to the rail by Jared Jaffee; who had moved all-in from the button with K♣ J♦ and received a call from Anthony Merulla sitting in the Big Blind position with A♥ 8♥. Both players managed to connect with the board of 9♥ 4♣ 3♠ / A♠ / J♣, but Merulla’s Aces were the better pair and Jared Jaffee was bust in fourth place. As the game went three-handed, David Paredes had almost half the chips in play:

After such a sensational start to the WPT Borgata Winter Championship final table, it was hardly surprising that the pace of the game subsequently reduced. The relative positions of the three players remained unchanged throughout Levels 32 and 33; with Anthony Murella inching closer to David Paredes – courtesy of a rivered K♥ in a 1.3 million chip pot against Anthony Maio which enabled Murella to take down the pot with trip Kings.

With a massive difference between what the winner of the WPT Borgata Championship would receive and the runner-up´s prize, the action during the early stages of the heads-up was unsurprisingly cautious. The more experienced Paredes ground out a 2:1 chip advantage over the next level of play, but Anthony Murella was able to double-up into the chip when his A♦ K♠ held against Paredes´ K♦ 2♦. Paredes put his head down and, throughout Levels 36 and 37, worked his way back on terms before taking the chip lead once again.

At the start of Level 38 (blinds now 250,000/500,000 – ante 75,000), Murella jumped back in front when his 7♣ 5♣ improved to a Flush on the Turn, but almost immediately Paredes was back on level terms (K♦ Q♦ > Q♠ 10♥) when it was his turn to get lucky and catch a gutshot straight to best Murella´s paired Ten. Paredes had the momentum again, and he built a 2:1 chip advantage by the beginning of Level 39; but two fortuitous hands saw Anthony Murella take the chip lead once again, and ultimately go on to win the tournament.

In the first hand, Murella hit the 4♥ on the River to pair his K♠ 4♣ and take a ten million chip pot from Paredes (Ace-high) and then, several hands later, the two players´ cards were on their backs when David Paredes moved all-in on the flop of Q♣ 6♣ 3♠.

Paredes needed an Eight or a Six to survive, but just missed his outs when the 7♦ was dealt on the Turn and 4♦ on the River. David Paredes was bust in second place and Anthony Murella had ridden his luck once again to become the 2014 WPT Borgata Winter Poker Open Champion.