Lucky for Some as 13 Qualify for ISPT Day 2

The first of the ISPT online Day 1s was played on MyPok.fr last night, with just 130 players registering for the opportunity to progress to Wembley in June. 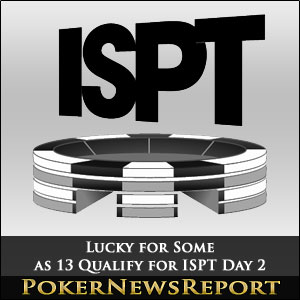 The first of the ISPT online Day 1s was played on MyPok.fr last night, with just 130 players registering for the opportunity to progress to Wembley in June.

It was a subdued start to the International Stadiums Poker Tour last night, with 130 players ponying up the €300.00 buy-in to compete in the Day 1A of the Partouche Poker network event or qualifying into it through the mostly under-subscribed super satellites hosted on MyPok.fr throughout the week.

Possibly the competition from the EPT Deauville or the Superbowl contributed to the depleted field, but organisers will be disappointed that they could not find 200 players with sufficient enthusiasm for the ISPT Day 1A – as will the Partouche group, whose Network Sunday Major “L´Enfer du Dimanche” also suffered with a low turn-out.

Perhaps of more concern to the International Stadiums Poker Tour is that the 13 players who qualified for Day 2 at Wembley in June will not need to participate in the five further online Day 1s on MyPok.fr – reducing the potential field for Days 1B to Day 1F further (and then further still as more players “qualify” in ISPT online Days 1B and 1C).

The lack of enthusiasm for the International Stadiums Poker Tour is not just reserved for French poker players. Over on Poker770 – possibly the ISPT´s best hope for a good turn-out at Wembley – the daily €11.00 and €2.20 re-buy qualifiers have been very quiet and not one player has yet registered for the site´s first online Day 1A scheduled for February 17th.

Lock Poker – who made such a big fuss of announcing they were partnering with the ISPT to provide an online route to Wembley for players from the States – did not get around to sending out email reminders to players until it was too late to register for three of the six “super” satellites yesterday, with the consequence that they have just one player registered for their first Day 1A scheduled for next Sunday (with no further satellites scheduled during this week).

With the removal of the banner on the ISPT web site that stated 2.119 players had already registered (an interest) in the event, the ISPT´s Chief Executive – Prosper Masquelier – may have over-estimated how many players will actually participate in the event. In an interview during the WSOP Europe last summer, Masquelier confidently stated We already have over 3,000 players registered. I think we will have around 20,000. I’m very confident.

Maybe new Lock Poker Pro and ISPT ambassador Michael Mizrachi can encourage some of his colleagues to get involved in Lock Poker´s online Day 1A by the time the first “open to all” event gets underway next weekend. The alternative may be that organisers of the ISPT have to move the goalposts at Wembley once again, and change the format of their proposed “historic” event into a 400 player SnG!