Chris Cousins admitted to getting lucky with fortunate river cards following his victory in the GukPT Brighton Main Event for £19,800 after a three-way chop. 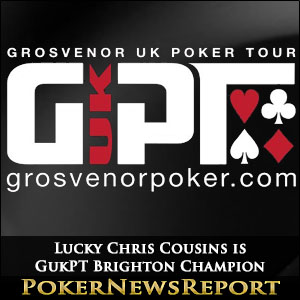 Chris Cousins admitted to getting lucky with fortunate river cards following his victory in the GukPT Brighton Main Event for £19,800 after a three-way chop.

The Brighton leg of the Grosvenor UK Poker Tour attracted a good field of 180 players for the £100,000 Main Event and, after two opening flights and a long Day 2 on Saturday, fourteen players returned to the G Casino in Brighton to play down to a winner.

The nine-handed final table was set after just two hours play when Sven Tiesmeyer moved all-in with A♠ J♣ and Hui Jin made the call with 8♦ 8♠. An Eight on the all club flop (K♣ 10♣ 8♣) gave Jin a set, but the 9♣ on the Turn completed Tiesmeyer´s flush. Incredibly the 10♠ on the River made Jin a Full House, and Tiesmeyer was out of the GukPT Brighton Main Event in the most unfortunate of circumstances.

With blinds of 6,000/12,000 (ante 1,500) when the final table got underway, five of the players had less than 25 big blinds, and consequently the action was lively right from the start. Last lady standing Ellis Blessek (A♥ K♣) was the first player to leave the final table when Chris Cousins (10♥ 9♥) completed a straight on the River, but Martin Bader survived a 5♣ 5♠ -v- 7♣ 7♠ hand against Ben Windsor to chip up out of trouble.

Chris Cousins again eliminated a player with a river card after Lee Taylor had moved all-in with A♥ 4♥ on the flop of A♣ 4♣ 8♣. Cousins made the call with K♣ J♠ and spiked the 7♣ on the River to eliminate Taylor in eighth place. Francois Goulet’s departure in seventh place was far more conventional – moving all-in with K♣ Q♦ and failing to improve past Ben Windor´s A♣ K♠ on an Eight-high board.

Joe Greenfield must have angered the poker gods prior to his departure in fifth place. Greenfield had already doubled-up Hui Jin A♠ Q♦ > K♦ 10♦ when he called Martin Bader´s shove with A♠ 9♣ on the flop of 3♦ 4♦ 9♣. Bader´s top pair top kicker turned into two pairs when the A♦ landed on the Turn but was second to Greenfield´s (K♦ Q♦) nut flush. Fortunately for Bader, the 9♠ spiked on the River, giving him a Full House and a valuable double up.

Greenfield´s final hand came against Chris Barnes – moving all-in with A♣ K♥ against Barnes´ pocket Jacks and failing to find either an Ace or a King on the Queen-high board. Greenfield was quickly followed to the rail by Martin Bader (A♥ K♥) when Hui Jin (A♦ 10♦) turned an Ace-high flush, and it was also a flush which was responsible for the demise of Ben Windsor in fourth place – Windsor (7♦ 4♦) flopping two pairs on the all-heart flop, but failing to improve against Chris Cousins´ (K♥ 2♥) flopped flush.

As the final table of the GukPT Brighton Main Event went three-handed Chris Barnes (1.6 million chips), Hui Jin (1.2 million chips) and Chris Cousins (900,000 chips) agreed on a deal which would see each receive £19,800, with a £500 tip for the staff at the casino. The winner would also receive the GukPT trophy and a seat at GukPT Grand Final in London in November.

Despite being the chip leader when three-handed play began, Chris Barnes was the next player to bust out, doubling up both Chris Cousins and Hui Jin before looking good for his own double up against Cousins A♣ 10♠ -v- K♣ 10♣. Unfortunately for Barnes, Cousins flopped a pair of Kings, and he was out in third place – giving Chris Cousins a 2.9 million -v- 700,000 chip advantage over Hui Jin going into the heads-up.

A Board Full of Hearts Give Cousins Victory

The heads-up climax to the GukPT Brighton Main Event lasted a little less than twenty minutes, and was concluded when Hui Jin moved all-in with Q♥ 9♥ and Chris Cousins called with a higher Heart combination – A♥ K♥. The flop of 7♥ 5♥ 4♥ gave Cousins the nut flush, but Jin had the chance of a chop after the 3♥ was dealt on the Turn. Unfortunately for the young student – who has only been playing poker for six months – the 8♥ on the River was not the Heart he was looking for, and Chris Cousins was the GukPT Brighton champion.