Aaron Lim won Event #4 of the Asia-Pacific World Series of Poker to become the first Australian poker player to win a piece of WSOP jewellery on home soil. 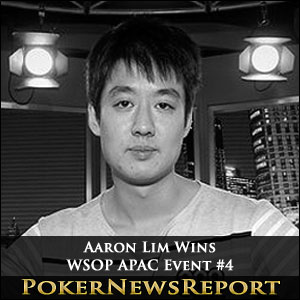 Aaron Lim won Event #4 of the Asia-Pacific World Series of Poker to become the first Australian poker player to win a piece of WSOP jewellery on home soil.

There have been a handful of Australian WSOP winners before – Joe Hachem, Andrew Hinrichsen, Jeffrey Lisandro and Mel Judah among them – but they have all had to travel to Las Vegas to achieve their victories. Yesterday, Aaron Lim lucked his way through the final table of the 6-Max No Limit Hold´em Event to become the first Australian poker player to win a cherished bracelet outside of the States.

In truth, an Australian victory was more than likely as the seven remaining players took their seats at the “unofficial” final table at the Crown Casino. In addition to overnight chip leader, Lim, there were four other Australians at the table, one adopted Kiwi (Jan Suchanek) and a Malaysian – Hun Wei “Andy” Lee. Indeed, it was Lee who came closest to preventing an Australian victory at all!

When play resumed at the Crown Casino in Melbourne, one could have been forgiven for not realising that a final table was in play. An unfortunate clash with Day 1A of the Main Event meant that most of the rail support was absent, and anybody who had just a fleeting interest in the game would have walked away through sheer boredom.

The highlights of the first two levels of play were that Aaron Lim had taken a stack of chips with a rivered set of Eights against Brendon Rubie, and then reduced his compatriot´s chip stack to less than 200,000 when forcing him out of a 160,000 chip pot in the next hand. Temporarily over 1 million chips, Lim started leaking like a sieve, and lost a big hand against Andy Lee (K♥ J♥ > J♦ 10♦) to give Lee the chip lead by the time the action really got going.

Rubie Starts the Fireworks – Then Blows Himself Up

The official final table of six was set when Jason Gray (J♣ 9♠) moved all-in on a flop of A♠ 9♣ 10♠ and ran into the Q♥ 10♣ of Brendon Rubie. Within five hands Billy Seri had joined Gray on the rail when he shoved the last of his chips into the middle with K♠ 7♣ and was called by Aaron Lim holding J♥ 3♣. The flop of 3♦ 3♠ 9♣ was exceptionally fortunate for Lim, and enabled him to chip back up to just under his starting stack.

Jan Suchanek also benefitted from some good fortune three hands later when his A♦ J♥ found the J♣ on the flop to eliminate Sam Higgs (A♠ Q♣) in fifth and, shortly after; Brendon Rubie became the fourth player to be eliminated in 17 hands when shoving pre-flop with A♣ 8♦ and running into the A♥ Q♦ of Aaron Lim.

Lee so Unlucky in Heads-Up

Event #4 of the AWAC WSOP could have been all over in the first few hands of the heads up when Aaron Lim moved all-in with A♦ 2♦ and was called by Andy Lee holding 10♥ 10♣. Fortunately (for Lim) the A♠ was dealt on the flop and Lim took a 3:1 chip advantage in the finale. Andy Lee battled back to draw level, but Aaron Lim was getting all the luck, and chipped into the lead once more when his Q♦ 3♦ caught the 3♣ to trump Andy Lee´s Q♣ 5♥.

Andy Lee battled back once again and took the chip lead when his 6♠ 6♥ was too strong for Lim´s A♥ 5♣. However, when he had another opportunity to close the game out, the cards would just not fall right for Andy Lee – calling Lim´s A♥ Q♦ shove with 10♠ 6♠ on a board of 2♣ 3♠ Q♠ / J♥ and failing to hit the spade on the river that would have created the first Malaysian WSOP Bracelet winner.

Incredibly Andy Lee came back for more – hitting Trip Ten´s and then a Full House within six hands to take the chip lead – and could have wrapped the tournament once again when Aaron Lim turned a Diamond Flush but Lee was holding the A♦ in his hand. A diamond one the river would have given Andy Lee the tournament and the WSOP bracelet, but once again the cards were in Aaron Lee´s favour and Andy Lee was to get knocked back to below half a million chips once more.

The final hand summed up the good fortune that Aaron Lim had enjoyed throughout the whole of the final day. Andy Lee (A♠ Q♦) raised to 40,000 pre-flop and Aaron Lim (K♥ 5♥) moved all in. Lee instantly made the call for his last 462,000 chips and the cards were placed on their backs.

The flop of J♠ 6♣ 3♠ and turn of 8♦ kept Andy Lee well ahead, and likely to double up back into contention, but the 5♠ on the river sealed the win for Lim and gave him the bracelet and AU$233,800 first place prize money.

167 players entered the AU$5,000 buy-in 6-Max WSOP APAC Event #4, creating a prize pool of AU$835,000. The top eighteen players cashed in the event, which those who made it to the final day receiving the following:-