Dan Shak enjoyed some stunning good fortune to survive the bubble of the PCA Super High Rollers Event and take the chip lead to the seven handed final table. 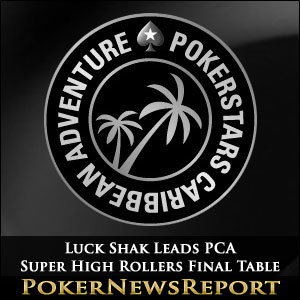 Dan Shak enjoyed some stunning good fortune to survive the bubble of the PCA Super High Rollers Event and take the chip lead to the seven handed final table.

This time last year, Vanessa Selbst was picking up her first victory of 2013 in the PCA High Rollers, and for most of Day 2 of the PCA Super High Rollers it looked as if she was going to carry a substantial chip advantage into the final day of the event and emulate last year´s success.

However, as the game became nine-handed, the dynamics of the tournament changed when Dan Shak benefitted from a huge slice of luck to survive the bubble in a hand which – had Vanessa Selbst won – would have given her almost half the chips in play.

There was also a sensational climax to the day´s action when three very short-stacked players survived all-ins before the dual elimination of Paul Newey and Mike McDonald in the last hand of the night set the seven-handed final table.

Late registration into the PCA Super High Rollers was still open before play got underway on Day 2, and it was no surprise to see Daniel Negreanu and John Juanda among the late re-entries. This brought the total number of entries up to 56 and created a prize pool of $5,433,120.

Altercott on Top – Selbst Does Not Start So Well

Max Altercott took over at the top of the chip counts before the first break of the day, after his A♥ Q♣ flopped a straight to cripple Dan Smith; and Bryn Kenney practically joined the chip leader when eliminating Tobias Reinkemeier K♣ K♥ > A♠ J♦.

Vanessa Selbst had resumed day 2 of the PCA Super High Rollers just outside of the top ten chip stacks, but had the worst possible start – doubling up Antonio Esfandiari 9♠ 9♦ (flopped a set) > 10♦ 10♣ – to reduce her stack to just 230,000 chips. Thereafter, however, she went on a major heater.

Further K.O.s against John Juanda (K♥ K♦ > A♠ K♣) and Philipp Gruissem (A♥ 10♥ > 7♦ 7♣) saw her rocket into first place on the PCA Super High Roller leaderboard, and the elimination of Bryn Kenney A♣ 9♣ > A♠ K♥ just after dinner enabled Selbst to open up a sizeable gap between herself and the rest of the field.

With only eight players cashing in the event, the action slowed considerably as the final table approached. As the blinds rose to 12,000/24,000 (ante 3,000) Igor Kurganov chanced his final 301,000 chips with 4♦ 4♠, but ran into Selbst´s A♥ K♦, which connected with the K♥ on the River, and Kurganov was bust in eleventh place.

Ole Schemion accounted for Max Altercott in tenth place when his 7♥ 7♣ was too good for Altercott´s Q♥ 7♠, but Vanessa Selbst had not finished crushing the PCA Super High Rollers and took half a million chips from Matt Glantz when her overpair J♦ J♠ were too strong for Glantz´ mucked hand. Dan Shak then took the chip lead in extraordinary circumstances considering how close he could have been to being eliminated.

Vanessa Selbst was well ahead, and looked like she was going to take a massive chip advantage to the final table, only for the 10♥ to spike on the River to give Shak a Full House and enable him to take over at the top of the leaderboard.

Tournament Lives Hanging on a Thread

Mike McDonald and Ole Schemion were also getting dangerously close to being blinded out of the PCA Super High Rollers tournament, but Schemion grabbed a lifeline when rivering a flush to come from behind against Matt Glantz Q♥ 5♥ > K♦ Q♠.

Eventually the blinds caught up with Paul Newey, and he moved all-in for his last 20,000 chips. Mike McDonald – who also had less than one big blind – moved over the top for 50,000, Matt Glantz completed from the Small Blind, but Fabian Quoss raised from the Big Blind, forcing Glantz to fold.

The flop of 8♠ 3♦ A♠ put Fabian Quoss firmly ahead in the hand, but the 6♣ on the Turn gave Paul Newey hope of a miracle escape. Unfortunately for him, the 5♣ bricked on the River, and both Newey and McDonald were eliminated – Newey as the “Bubble Boy” on the grounds that he had entered the hand with fewer chips than McDonald.

Looking Ahead to the PCA Super High Rollers Final Table

With only seven players remaining, the climax of the PCA Super High Rollers should take a little less time to conclude than Day 2´s protracted action. When play resumes at the Atlantis Resort in the Bahamas, players will still have a few hands left in Level 19 before hitting blinds of 40,000/80,000 (ante 10,000).

When that happens, Matt Glantz, Tony Gregg and Ole Schemion will only have sixteen big blinds between them, while it will be fascinating to see whether Vanessa Selbst can recover mentally from her last-minute setback against Dan Shak, or whether Antonio Esfandiari and Fabian Quoss can mount a challenge that will see one of them become the PCA Super High Rollers Champion.