Liv Boeree´s stunning run, Daniel Negreanu´s long walk and taking Full Tilt to new levels. No idea what we are talking about? Read it here at Poker News Report. 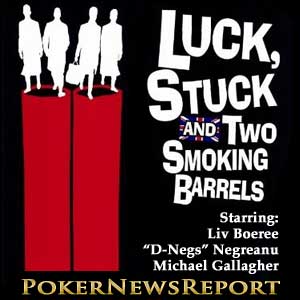 After a quiet year, by her own impressive standards, Liv Boeree is currently experiencing a stunning run at online poker site [geolink href=”https://www.pokernewsreport.com/pokerstars”]PokerStars[/geolink]. Having won the PokerStars women´s Sunday tournament towards the end of last month, she collected a handful of minor cashes prior to winning the WCOOP second chance tournament on September 11th for $40,488.

Liv followed that up with victory in last Sunday afternoon´s $75.00 buy-in NL Hold´em tournament and overnight cashed in the WCOOP 45 turbo event and won the PokerStars “Big 55” $100K guaranteed tournament for a further $19,822. Liv has already entered the WCOOP series climax – the $5,200 buy-in Main Event with $5 million guaranteed – so if you were still undecided about whether to enter … … !

Daniel “D-Negs” Negreanu could not maintain his discretion (again) – but this time it was about the poor standard of London accommodation. Having booked the most expensive suite at the London Hilton Metropole in order to be right on top of the action at the European Poker Tour, he found it was the only room in the hotel that did not provide a Wi-Fi connection and he could not compete in the WCOOP.

Having checked out of the Hilton, he travelled down Park Lane to the Ritz – where he was charged $1,000 for 15 minutes in a room he decided he did not like – walked up Piccadilly to discover that the Soho Hotel was full (that´s what they said anyway!) and then back along Curzon Street to spend the night in the Mayfair Hotel.

Having lucked into the money in WCOOP44 (won with AQ v AK), Negreanu then busted out shoving with an ace and a rag from small blind (serves him right!), and then announced to the world that he was checking out of the Mayfair in the morning to try and get a room at the W Hotel in Wardour Street. Being in the centre of London´s theatreland should suit Negreanu – he is such a drama queen!

An unnamed “Isle of Man poker site” has experienced a security alert surrounding an online poker player who took being on tilt to a new extreme. Michael Gallagher from Redcar threatened the site via an email in which he threatened to visit their offices with sawn off shotgun unless they reimbursed him with the $30,000 dollars he had lost during the previous thirteen months.

Although he sent a second email the following day, apologising for the threat and blaming it on playing under the effects of alcohol, staff at the poker site notified the police who charged Gallagher with blackmail. On legal advice, Gallagher pleaded guilty to a lesser charge of conveying a threat via electronic communication, and is currently released on bail waiting for a judge to pass sentence.