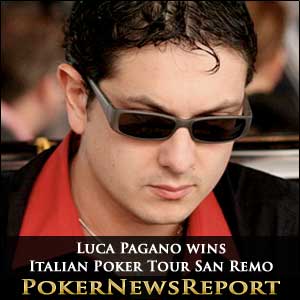 Team PokerStars Pro Luca Pagano – who is considered one of the most pleasant professional players – is probably best known for his massive performances on the European Poker Tour (EPT) circuit, having notched a record-setting 18 cash finishes, including six final-table spots, over seven seasons of the tour.

The 33-year-old follows in the footsteps of a couple of big-name pros in Jason Mercier and Liv Boeree, who both notched their first notable live tournament successes in the Italian city.

Pagano’s big break, meanwhile, arrived with a third place for his first EPT cash in Barcelona way back in 2004, although this victory is his first noteworthy triumph on home soil.

Back in Casino Sanremo, however, he overcame the challenge of 425 other competitors – who created a prize pool of €826,440 – to leave with the huge first prize after beating Romanian Dan Murariu in their heads-up clash.

Pagona – who has also recorded two in-the-money finishes at the World Series of Poker (WSOP) since turning pro on 2004 – took the title from a final hand that proved thrilling following nearly three hours of two-handed play.

Heads-up against Murariu, Pagano’s A♦ Q♠ held strong against the Romanian’s Q♣ 9♦ on a board that showed 2♣ 8♠ 7♣ J♥ 3♥, although the Italian must have been slightly concerned when he saw his opponent gain a gutshot draw on the turn.

Another Italian, Enzo Tommasone, finished in fourth place for €62,000 – just behind countryman Matteo Fratello – to record his first cash on the tour since finishing fifth at the IPT Nova Gorica last March.

The next leg on the second IPT season is at Nova Gorica’s Perla Casino, running from September 1-5, while the follow-up event will take place in Casinò di Campione from November 24-28.