A Louisiana lawmaker has asked a joint committee to conduct a study on the practicality of online gambling in time for the 2014 legislative session. 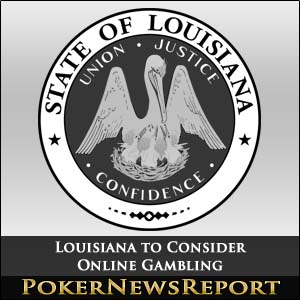 A Louisiana lawmaker has asked a joint committee to conduct a study on the practicality of online gambling in time for the 2014 legislative session.

Rep. Mike Huval has proposed a resolution asking the House Committee on the Administration of Criminal Justice and the Senate Committee on Judiciary B to work in tandem to determine the feasibility of Internet gaming in the Creole State. While analyzing the merits of such an endeavor, Huval suggests that the joint committee obtain information from a number of sources, including the Louisiana Gaming Control Board, the governor, the gaming divisions of both the state police and attorney general’s office, and representatives from the gaming industry itself.

The Louisiana gaming industry has contributed $14.3 billion to state coffers the past 23 years and projections for 2013 show that gambling will be accountable for 6% of state-generated revenue. Louisiana has roughly two dozen casinos, both riverboats and brick and mortar establishments.

Huval’s resolution cites the fact that Louisiana enacted a law in 1997 that made it a crime to gamble by computer but also points out that many Louisianans do still gamble online at any number of websites. The legislator stresses that the 1997 statute is now rather antiquated, as Internet usage and technology have flourished since that law was passed.

Recognizing the fact that Nevada, Delaware and New Jersey have all legalized forms of online gambling in a nine-month period, Louisiana stands a good chance of benefitting economically by also regulating gambling over the Internet, Huval states. He is also concerned with providing safeguards for Louisiana residents who wager online and recommends a regulatory framework in which to do so.

Louisiana joins a number of states that are contemplating online gambling legislation, including California, Pennsylvania, Illinois and New York. Without federal legislation, expect even more states to jump on the bandwagon.