Louisiana residents who have been hoping to play regulated online poker and casino games may have to wait until Governor Bobby Jindal is no longer in office. 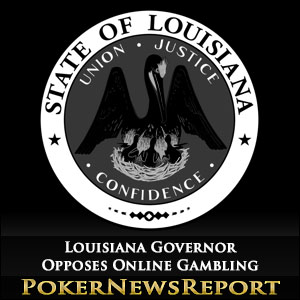 Louisiana residents who have been hoping to play regulated online poker and casino games may have to wait until Governor Bobby Jindal is no longer in office.

Lindal has voiced strong opposition to Internet gambling, saying that he will do his best to keep Louisiana from joining the three states of New Jersey, Delaware and Nevada that have thus far enacted online poker and gambling legislation. Jindal made his comments in an op-ed piece published in the Greater Baton Rouge Business Report last Friday.

Louisiana recently was named as one of 10 states that were reportedly said to be considering the legalization or expansion of online gambling in 2014. Making this list apparently irked Jindal, as he reiterated that one of his campaign promises was to put a stop to any gambling expansion proposals put forth by state legislators.

Jindal is apparently taking a page out of the book of Las Vegas Sands CEO Sheldon Adelson, who has waged war against online wagering by forming a Coalition to Stop Internet Gambling. Adelson and his minions have posted several articles in the editorial sections of U.S. newspapers recently in an effort to voice their anti-online gambling stance.

While Jindal’s piece never mentions Adelson’s coalition by name, he does mimic much of what the billionaire casino mogul has argued in his steadfast belief that online gambling is not good for society. Namely, that minors cannot be protected from wagering online and that the criminal element may use Internet gambling sites to further their efforts at fraud and money laundering.

The Louisiana governor also calls for the 2011 DoJ ruling that reinterpreted the Wire Act and paved the way for individual states to enact online poker and gambling legislation be overturned. Adelson has spewed the same proposal, going so far as to draft the Internet Gambling Control Act that, if passed on the federal level, would prevent states from acting on their own with regard to online gambling.

Other state legislatures said to be in line for online gambling regulation debate this year include Hawaii, Iowa, Pennsylvania, Colorado, California, Illinois, Mississippi, Massachusetts and New Jersey. While New Jersey has had an online gambling scheme up and running for almost three months, Garden State lawmakers are believed to be eyeing international expansion.

Adelson has vowed to spend whatever cash is needed to advance his efforts at wiping out the proliferation of online gambling legislation in the U.S. Seeing the similarity in his beliefs and those of Jindal, it is quite likely that the casino magnate has targeted politicians in some of those aforementioned states in order to keep Internet gaming proposals from making progress.

Louisiana is home to about two dozen casinos and riverboats that have been responsible for providing over $14 billion in revenue for the state since 1990. Last year, the Louisiana House voted in favor of an Internet gambling feasibility study to determine the pros and cons of amending its current legislation to include the Internet. But without Jindal’s blessing, any such studies may go for naught.