Frankfurt online HUSNG specialist Louis Cartarius took down the PokerListings-sponsored Battle of Malta last weekend for a career-best cash of €80,000. 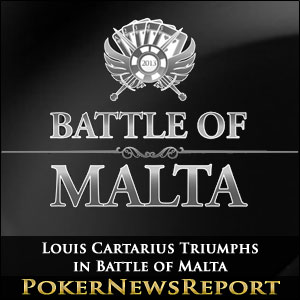 Frankfurt online HUSNG specialist Louis Cartarius took down the PokerListings-sponsored Battle of Malta last weekend for a career-best cash of €80,000.

PokerListings will obviously be delighted by the turn-out at the Portomaso Casino, while the winner qualified for the event via an online satellite hosted by another primary sponsor – Betsafe.com – and the total number of players will make good advertising copy for the third primary sponsor – 888Poker.

After two Day 1s and a lengthy Day 2, the field of 888 players was reduced to just twenty-four and, within a couple of brutal hours, the final table of nine was set when Mariano Aquila´s Q-T failed to improve past Arthur Popov´s A-Q.

A Couple of Bad Beats to Start the Final Table

With blinds of 50,000/100,000 (ante 10,000) when the final table started, there was little hanging around as the climax of the Battle of Malta began. Daniel Lucasz was unlucky to be eliminated in ninth in the battle of the short blinds when his A-8 looked good to top Louis Cartarius´ A-3, but a Three on the flop put Cartarius ahead and, with no Eight on the Turn or River, Lucasz was the first player to leave the final table.

Guiseppe Polichetti (A-K) can count himself to be equally unlucky – calling a shove from Lauri Pesonen (A-Q) and watching a Queen hit the flop to eliminate the Italian in eighth, while 888Poker freeroll qualifier Sonny La also saw his chip stack suffer when doubling up Ambjorn Haga – enabling Haga to go into the dinner break with 4.675 million chips and a substantial chip advantage over the other six players that remained.

Haga Steam Rollers Final Table – then Runs Out of Steam

Whatever Ambjorn Haga had to eat during the dinner break certainly set him on fire. He bust Sonny La out in seventh by flopping trip Nines and cracking the qualifier´s pocket Aces, took out Alessandro de Iaco in sixth A♦ A♥ > A♠ K♥ and Arthur Popov in fourth 9♣ 6♦ > A♥ 3♥ after turning Trip Nines. Only Louis Cartarius offered any resistance to the runaway chip leader – eliminating Lauri Pesonen in fifth A♦ 8♠ > 9♠ 7♠ and doubling up against Ambjorn Haga 4♥ 4♠ > A♦ 9♦.

With just three players remaining, it seemed just a question of time until Haga and Cartarius would face each other in the heads-up, but local player Konrad Abela had other ideas. Abela took the chip lead with a double-up against Haga A♥ Q♥ > K♣ J♣, and even though Louis Cartarius bust out Ambjorn Haga in third 8♦ 8♣ > 5♦ 5♣ (both players made sets), he was still competitive going into the heads-up with Cartarius on 10.1 million chips and Abela having 7.6 million chips.

With blinds at 150,000/300,000 when the heads-up began, neither player could afford to make a mistake. A very tactical period of play ensued – during which time Cartarius (a heads-up specialist) increased his chip lead to 12.5 million -v- 5.2 million chips. Eventually Abela was forced to shove, and he very nearly turned the game on its head.

Abela moved all-in with A♠ J♣ and was snap-called by Cartarius (A♥ Q♥). The partisan crowd was on its feet when the flop of J♦ 7♠ 4♠ was dealt – putting the Maltese player into the lead in the hand; but their enthusiasm was quickly quelled when the Q♦ was dealt on the Turn, and the 4♦ on the River confirmed Louis Cartarius as the victor in the Battle of Malta.

In a post-victory interview, Louis Cartarius admitted that he had treated the trip to Malta as something of a holiday and had actually fallen asleep at the tables during Day 2 as a consequence of partying until 8.00am at the end of Day 1B. With victory in the Battle of Malta Main Event, Cartarius now has 80,000 more reasons to celebrate!

For live updates and more info please visit Battle of Malta at PokerListings.com.