The invasion of Barcelona has already begun with “foreigners” occupying 21 of the top 24 positions on the Estrellas Poker Tour Main Event leaderboard. 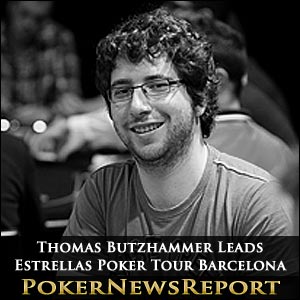 The invasion of Barcelona has already begun with “foreigners” occupying 21 of the top 24 positions on the Estrellas Poker Tour Main Event leaderboard.

The decision to schedule the beginning of the European Poker Tour Season IX in Barcelona with the climax of the Estrellas Poker Tour paid a massive dividend yesterday, as the previous record of players competing in the Estrellas Main Event (498 in Madrid 2011) was smashed beyond belief.

Leading the way after two Day 1s is German Thomas Butzhammer – winner of the GSOP Main Event in Salzburg earlier this year – with 184,000 chips. He holds a narrow lead from Spaniard Samuel Bernabe Guilabert (180,000 chips) with a gap back to the third placed player, PokerStars Pro Jude Ainsworth (164,400 chips) who was the best performer on a crowded and noisy Day 1B.

Guilabert, who is yet to record a live poker cash on the Hendon Mob database, was a shining star amidst a miserable day for Spanish poker players, with only three locals featuring in the top 24 positions on the Estrellas Poker Tour Main Event leaderboard. Previous Estrellas winners Antonio Dieguez Rodriguez and Alvaro Santamaria were early casualties, along with Spanish soccer legend Poli Rincon and the man with the record for Estrellas final table appearances – Jorge Ufano.

Many of the surviving Spanish players only just scraped into Day 2 by the skin of their teeth and established stars such as Juan Manuel Pastor (55,100 chips), Juan Maceiras (49,000 chips) and Ana Marquez (28,100 chips) are going to find it difficult to work their way back up the leaderboard when the two fields combine, against the likes of previous EPT winners Christophe Benzimra (58,700 chips), Kevin MacPhee (53,100 chips) and David Vamplew (42,800 chips).

When play recommences at Barcelona´s Arts Hotel this afternoon, blinds will be 500/1,000 with a 100 ante. 14 different nationalities appear in the top 20 positions of the Estrellas Poker Tour Main Event and those who will be enjoying an excellent international breakfast this morning include:-