A 17th stop has been added to the 2011-2012 World Series of Poker Circuit (WSOPC) schedule, with the tour now visiting the Bicycle Casino in Los Angeles for the very first time. 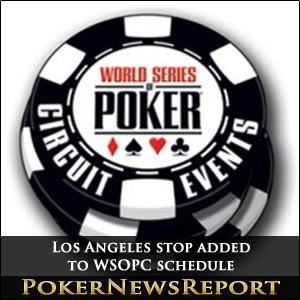 A 17th stop has been added to the 2011-2012 World Series of Poker Circuit (WSOPC) schedule, with the tour now visiting the Bicycle Casino in Los Angeles for the very first time.

With the schedule already five events in, this latest addition will run from Sunday, January 1, 2012, until Thursday, January 12. The stop will offer 34 poker events, 12 of them ring tournaments, and will come to a close with the $1,500 buy-in main event.

WSOP executive director Ty Stewart is thrilled to see LA added to the tour schedule, and said: “With the WSOP Circuit Tour breaking records at every stop, it was finally the right time to come to LA for a signature mid-season event.

“We’re pleased to enter a multi-year agreement with the Bicycle Casino for what is certain to be one of our largest annual events.”

Known as The Bike, the casino – which possesses more than 150 poker tables – will host the first WSOP-branded tournament in Los Angeles and see Mo Fathipour as tournament director.

The Bike’s chief executive officer and managing partner Hashem Minaiy is relieved to have finally secured a WSOP event for the Californian city.

He said: “The process of bringing the World Series of Poker to Los Angeles has been a long time in the making, and we are very pleased with the finalisation of our partnership.

“Players have wanted to play a WSOP event in LA, where poker has always been king, and the Bicycle Casino is considered a key venue for players worldwide.”

So, if you’re keen to make the trip to LA, make sure you don’t miss out by taking part in qualifiers for the National Championship on the WSOPC.

Also, don’t worry if you’ve missed the first few events, there are more than enough opportunities still available to sign up for the remaining legs on the WSOPC calendar.