Lorenzo Sabato is the Star of Estrellas Main Event

The ox of Rome took down the Estrellas Poker Tour Main Event last night with more than a little help from the ladies. 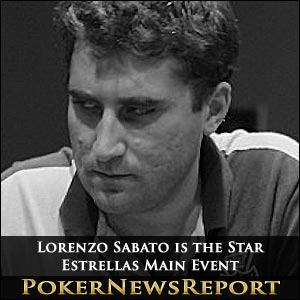 The ox of Rome took down the Estrellas Poker Tour Main Event last night with more than a little help from the ladies.

Very few people will have previously heard of Lorenzo Sabato on the live poker circuit but, under the name of “bovediroma” (the ox of Rome”), Sabato has been storming the online tournaments on PokerStars.it.

Throughout the record-breaking Estrellas Poker Tour Main Event, Sabato has transferred his online skills to the tables of Barcelona – leading the tournament after two days and last night claiming the Estrellas Champion´s Plaque and first prize of €200,000.

As the final table started, many locals were hoping to cheer a Spanish victory. From an abysmal start to the Estrellas Main Event – where only four Spanish players featured in the top 24 positions – the “home team” had recovered to have four contenders among the final table of eight, including the two chip leaders:-

Starting the final day in third position of the eight players seated around the final table at the Arts Hotel in Barcelona, Sabato was involved in the action quickly – twice forcing Bernabeu out of large pots with river raises and eliminating Jonas Garstick when the short-stack player got all-in with 5♥ 7♥ on a board of 5♦ 7♣ A♥ / 4♦. Unfortunately for Garstick, Sabato was holding 6♥ 8♠ for a turned drawn, and the 2♥ on the river could not save him from leaving the game.

What Goes Down, Must Come Up

Sabato´s enhanced chip stack was short-lived as, soon after, both Artur Urgelles and Andrey Demidov forced river folds from the Italian to leave him at the start of level 26 (blinds 20,000/40,000 – ante 4,000) with just two big blinds more than he had started the day with. From this point however, there was no stopping Sabato´s rise up the leaderboard.

First, he was able to claim an uncontested million chip pot with a 2 million chip shove after Bernabeu, Urgelles and Mora had each raised on their turn in the pre-flop round of betting, and then Sabato took the chip lead when taking another 1 million chip pot from Mora (4♦ 4♠) with pocket Kings. Mora also chipped up Niclas Svensson when the Swede hit a set of Eight´s against Mora´s K♣ 9♣, but the overnight chip leader got himself back into contention when his pocket Nines were too strong for the pocket Fives of Artur Urgelles – Mora busting his compatriot out in sixth place.

Estatuet Llorens was the next player to depart – the Spaniard getting his chips into the middle with A♠ 7♠. Sabato called with Q♥ Q♣ and, with no help from the board, Llorens became the second Spanish elimination in just a few hands. The double knock-out became a triple, as Bernabeu became the third Spanish player in succession to bust out – his 4♦ 4♠ coming second to Sabato´s A♦ 10♠ on a board of 7♣ A♣ 10♦ / 3♣ / Q♥.

With his stack of more than 8 million chips, Sabato was involved in every hand, but it was the Russian, Andrey Demidov who was responsible for the next elimination – that of Miguel Mora. Mora had found himself the shortest stack of the four remaining players after his set of Kings had been outdrawn by the runner-runner spade flush of Niclas Svensson. In his final hand, Mora shoved from the Big Blind with 5♥ 5♦. Demitov called with A♠ 4♥ and Mora was aware of his fate immediately after the A♠ was revealed as the first card of the flop and hopes of a Spanish victory were extinguished.

Although drawing to the conclusion of the tournament, there was no let-up in Sabato´s aggression. He forced big folds out of both Svensson and Demidov before eliminating the Swede with Q♠ Q♣. The heads-up against the Russian lasted less than 20 minutes with Demidov shoving his final chips into the middle with 5♠ 9♠ on a board of 6♣ 4♥ K♥ / 5♣ and seeing Sabato turn over Q♣ Q♦. The J♥ on the river gave Sabato victory – having eliminated three of the final five players with pocket Queens!

There was at least something for the Spanish to cheer last week, as Christian Sargues Hernandez took down the €200.00 NLHE side event for €9,300 ahead of Russian Maxim Seregin, while American poker player Alexander Beck won the €100.00 NLHE Turbo for €4,730 at the expense of Dutch player Jacco Jan Leemans.