One of Britain’s most famous poker venues, London’s Fox Poker Club, has been bought by Genting Poker for an unknown amount. 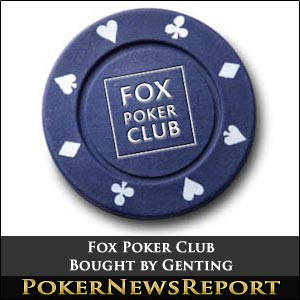 One of Britain’s most famous poker venues, London’s Fox Poker Club, has been bought by Genting Poker for an unknown amount.

The casino operator will add the Shaftesbury Avenue club – which has more than 20,000 members and is the city’s sole fully licensed poker venue – to their portfolio of venues that also includes the Mint, Circus and Maxims brands.

Genting UK – a subsidiary of Genting Malaysia – certainly understands the potential of the club, which opened late last year, and will look to build on the flourishing popularity of the venue.

The company, which is in actual fact owned by massive Asian hospitality and leisure company Genting Berhad and runs 45 casinos as Britain’s largest operator, has been making big moves to promote their brands and only recently agreed a two-year shirt sponsorship deal with English Premier League football club Aston Villa.

The Fox Poker Club, now with about 80 staff, was established by Ian Hogg and Chris North back in 2005, received a full casino licence three years ago and eventually became open to the public in September last year after approximately $1million was secured to develop the venue.

The club’s managing director North said it had been “a dream…to open a poker club” in the centre of Britain’s capital city and, while “it’s been a challenge” due to long delays in opening the club, as well as troubles gaining a 24-hour licence – which were only resolved in July of this year – he is “extremely proud” of what he and partner Hogg have achieved.

North, who is relieved to see the club “passing to such good hands”, added that he is confident the sale to Genting will allow the club, which is already “in a great position to continue growing”, to gain even more “success in the future”.

Hogg, who was the club’s chairman, backed North’s beliefs, while adding that he and his partner were always confident that there was a place “for a poker club in the heart of London”.

Certainly, Hogg has no intention of leaving the venue behind and will “be back to play games on a regular basis”, but also stated that he has enjoyed being a part of “a wonderful project” and is thrilled to witness the club “develop into one of London’s best venues”.

It’s definitely been an enterprising few days for the leisure company after details of the latest tour – guaranteeing a prize pool of at least £800,000 (approximately $1,246,553/€930,858) – to hit Britain was announced yesterday.

There will be seven events included as part of the Genting Poker Series schedule, starting in Birmingham’s Star City from February 1-5, to be followed by stops in Southend (March 28-April 1), Edinburgh (May 30-June 3), Stoke (August 1-5) and Sheffield (September 26-30).

Then there will be an online leg from November 10-13, before the tour comes to a conclusion at London’s Palm Beach Casino, Mayfair, for the Grand Final from December 7-11.