After a supersonic Day 3 of action, Johnny Lodden still leads the PokerStars-sponsored EPT Monte Carlo Main Event – but the challengers are queuing up behind. 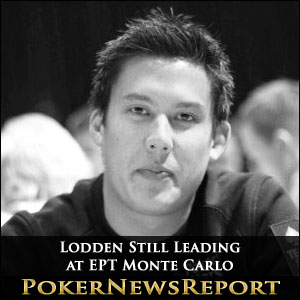 After a supersonic Day 3 of action, Johnny Lodden still leads the PokerStars-sponsored EPT Monte Carlo Main Event – but the challengers are queuing up behind.

Johnny Lodden might have led the EPT Grand Final at the start of Day 3 and at its conclusion but, between those two times, several other players grabbed top spot in the chip counts. Calvin Anderson, Andrew Pantling and Steve O´Dwyer all held the chip lead at one stage during the five levels played on EPT Monte Carlo Day 3 in the Salle des Etoiles but, at the end of the day, it was Lodden who was the only player to crack the one million chip barrier.

The Norwegian poker pro endured a fairly quiet start to the day on the feature TV table, during which time his opening chip stack 605,200 dwindled down to around 550,000 after a couple of levels. However, as soon as Lodden had been moved off the live stream he was back on fire – turning trip Queens to best Daniel Negreanu´s paired Ace and then winning the biggest pot of the tournament so far against Panagiotis Gavriilidis.

Gavriilidis immediately shoved his remaining 400,000 chips into the middle and, after a three minute spell in the tank, Lodden – who only had 585,000 chips remaining – made the call. Gavriilidis had failed in his attempt to bluff Lodden out of the pot, but could still capture the hand with a Two (for a set) or Three (for a straight). Fortunately for Lodden the 10♣ was dealt on the river and Johnny Lodden was back on top of the leaderboard – finishing the day with 1,232,000 chips.

The Challengers Queuing Up Behind Lodden

Steve O´Dwyer sits in second place overnight after chipping up earlier in the day against Christopher Frank (O´Dwyer held K♦ Q♠ and flopped the nut straight) and then eliminating Stephane Benadiba in a set over set hand (6♠ 6♣ > 5♦ 2♦), while Andrew Pantling holds third after winning a major ding-dong battle with Calvin Anderson – the latter eventually getting bust from the tournament by Vasili Firsau (6♦ 6♠ > A♦ Q♥),

Behind the top trio, John Juanda appeared on the scene after turning the nut flush to best two players who had both flopped straights. Juanda later eliminated James Mitchell J♦ J♥ > K♠ Q♠ to finish the day in fourth place, with Jason Mercier and Daniel Negreanu also occupying places in the top ten chip counts (below). Out of the top ten, but still in contention among the 34 players that remain in the EPT Monte Carlo Grand Final are PokerStars pros Jake Cody (639,000 chips), Victor Ramdin (479,000) and Mickey Petersen (368,000) who had the good fortune to be dealt  A♣ A♥ when both Noah Schwartz and Ignat Liviu had been dealt pocket Kings.