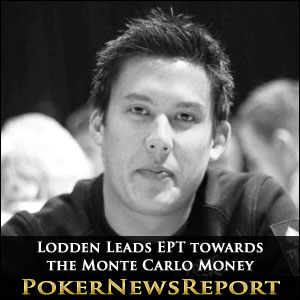 Just 126 players remain in the PokerStars-sponsored EPT Monte Carlo Main Event and, with the top 80 players guaranteed a min-cash of €16,000, the early levels of Day 3 promise to be a tense affair for those at the bottom of the leaderboard.

Day 2 of the ‘Grand Final’ saw a number of leading players make their charge towards the €1,224,000 first prize, with players such as Jake Cody, Paul Volpe, Victor Ramdin and John Juanda all finishing comfortably above the average chip stack of 126,500; but it was Johnny Lodden who stole the headlines.

Many of Johnny Lodden´s chips came in his direction late in the day – a turned flush relieving Mohamed Mamouni of 60,000 chips and the elimination of Anaras Alekberovas (Q♥ Q♦ > 4♣ 4♥) for another 57,000 chips enabling the PokerStars pro to chip up to 605,200 chips by the close of play.

Lodden´s late burst denied Calvin Anderson the honour of being overnight chip leader after Anderson had started the day running, was the first player to chip up over 300,000 chips when flopped trip Sevens turned into a Full House on the river and took three streets of value from Charbel Salloum.

Noah Schwartz and Oleksii Kovalchuk managed to maintain their positions from Day 1B to finish the day third and fourth in chips respectively, but possibly a bigger threat to Lodden´s position will come from two colleagues in the PokerStars stable – Daniel Negreanu and Jason Mercier.

Negreanu Rolling and Mercier there for the Ride

It would be unkind to say that the best view of Daniel Negreanu would be when he is walking away from you, but Tobias Reinkemeier would probably be happy if he never shared a table with Kid Poker again! Reinkemeier had gone into Day 2 in a fairly healthy position, and chipped up quite nicely on a table which included Anaras Alekberovas, Taylor Paur and Alexander Dovzhenko.

However, when Negreanu joined the table at the beginning of Level 13 (blinds 1,000/2,000 – ante 300) everything started to go wrong for the German. First he lost a third of his chips when Negreanu´s K♣ 10♣ made top pair on the flop, and then Reinkemeier shoved the remainder of his chips with 10♠ 10♦ into Negreanu´s A♠ K♠, and a King on the flop (again) ended the former EPT High Roller winner´s participation in the Grand Final.

Jason Mercier also chipped up late in the Day 2 proceedings, having earlier been responsible for the dual knockout of Artem Litinov and an unknown player when spiking an Ace on the river to pair his A♠ 10♠. Mercier, who already has won this week´s Open Face Chinese Poker event for €48,000, tweeted late in the day “Just knocked out another AK > AQ”.

Looking Ahead to Day 3 of the EPT Monte Carlo

When the remaining 126 players take their seats at the Salle des Etoiles in Monte Carlo at 12.00 noon, the tournament will be entering Level 15 (blinds 1,500/3,000 – ante 400). Six 75-minute levels are scheduled for today, with the bubble expected to burst before the dinner break.

While it may be a twitchy couple of hours for the likes of Davidi Kitai (73,500 chips), Randy Lew (70,300 chips) and Kevin Vandersmissen (69,600 chips), those who will sit more comfortably in their seats include:-