A Lock representative indicates that he could secure a fast payout for a high-volume player if he raked 10k a month. 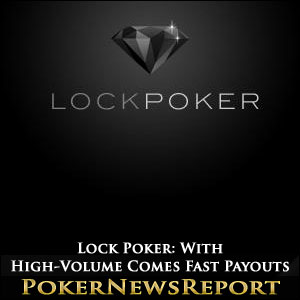 A Lock representative indicates that he could secure a fast payout for a high-volume player if he raked 10k a month.

Over the past several months, Lock Poker has done everything within its power to irrevocably damage its reputation. First, it stopped paying its customers in a timely manner. Next, it abandoned its forum on Two Plus Two in favor of a private forum accessible only to higher volume ($100 rake or more per month) players. And despite representatives stating that payout times will speed up soon, soon never came. This in turn, led the value of Lock dollars to depreciate to a paltry 20 cents.

But apparently Lock Poker does have the ability to pay its users, in so long as they rake 10k or more a month. In a recent Skype conversation with Lock Poker’s Shane Bridges, a player (preferring to stay anonymous) asked if he placed a certain amount of money on the site, could he receive preferential treatment, to which Shane responded:

I’ve been told that with your VIP status and playing history with our site if you can hit 10k a month [in rake] I can guarantee a monthly payout for you.

The player then stated that he would be moving money to lock. Shane then made a rather questionable statement implying that cashouts on Lock Poker are gaining momentum and that he was confident the site will deliver on this [allowing the player 1-2 cashouts per month]. The player suggested that there was a rash of cashouts recently, to which Shane replied that they were due to better processing.

The question raised is that should an online casino offer better treatment to its high rollers?

In truth, online casinos, just like live ones, shouldn’t be criticized for treating their VIP members to faster cashouts and better service. However, because Lock’s cashout issues have had such a negative impact on its reputation, the last thing it should be doing is offering special service to high-volume players. Instead, it would be in its best interest to focus on those who have yet to be paid, especially players with outstanding payouts requests of 60 days or more.

In all likelihood, players who haven’t received their funds are going to perceive Lock’s kindness towards VIPs as a slap in the face.

When asked to comment on Lock’s supposed high-roller policy, Shane Bridges did not respond. It is not known whether or not the player who initiated the conversation with Shane did so just so he could reveal Lock’s underhanded ways. If anything, let’s hope that Lock Poker begins or continues (as based upon the Skype conversation) to honor cashout requests.