Lock Poker will leave the Merge Gaming Network, take over the Cake network and rebrand it to the Revolution Gaming network. 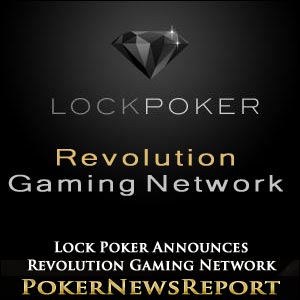 As widely anticipated, the news that Lock Poker was leaving the Merge Gaming Network was officially confirmed in a press release by Lock Poker CEO Jennifer Larson earlier today. In the release Ms Larson substantiated rumours which had started on Sunday that Lock Poker was taking over the Cake Poker Network and rebranding it.

However, the only details revealed in the press released that had not been circulated around the net yesterday was the name of the new network – Revolution Gaming – and the date the changeover was happening – 31st May. An improved loyalty package, tournament program and the re-introduction of rakeback are included in what is promised for the “new” Lock Poker, plus a faster cashout structure and the presence of more Lock Pros on the site.

The Text of the Lock Poker Press Release

Unfortunately, the text of the Lock Poker press release was written by a PR company rather than by a poker player, so it is incredibly cheesy and likely to disinterest any potential new customers.

As of June 1st a whole new world awaits the Lock Nation.

Lock is in the process of acquiring assets from Cake and will be re-branding the Cake Network to launch Revolution Gaming, driving technology, marketing, player rewards and implementing a richer tournament schedule. The LockPRO team will be at the foundation of these changes. They will come together and offer their recommendations on all levels, truly bringing the player into the boardroom.

To all existing Lock players this move will be seamless – it will take the form of a simple software update happening on May 31st. You will login to find your real money balance as well as everything else you know and love about Lock. Lock will also continue to manage their own stand-alone cashier so withdrawals will be as fast and easy as they are now. All players’ current player VIP rewards will only increase and all rakeback players will be moved over to the increased percentage on Revolution. More details coming soon.

Get ready for the exciting new times ahead as we continue to drive the new era where the player reigns.

We are very excited at the prospect of driving the product, marketing and overall vision of the network. It is a dream come true says Jennifer Larson, CEO of Lock. Merge was a great stepping stone for us but we have outgrown them. We really need to forge our own path to continued success. The only way to do this is to stay true to our of core philosophy: partnering with our players.