Lock Poker has announced the LOCKOPS (Lock Online Poker Series) which runs until Sunday May 20th and includes over $2 million guaranteed in prize money. 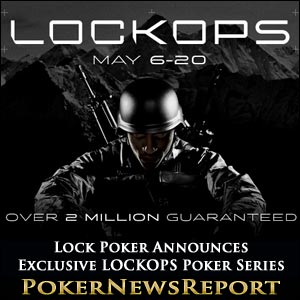 One of the leading skins on the Merge Gaming Network – Lock Poker – has announced the LOCKOPS online poker tournament series exclusively available to players on its web site.

LOCKOPS (Lock Online Poker Series) runs from Sunday May 6th until Sunday May 20th and includes 33 tournaments with over $2 million guaranteed in prize money, a leaderboard competition and a Champion of Champions Event which will send the two best players to the World Series of Poker Main Event.

Lock Pros Put Their Heads on the Line

Each of the 33 events will be hosted by a Lock Poker Pro Elite – with a bounty available for any player who eliminates them from the tournament. Lock Pro Elite players have been making the headlines recently with Chris Moorman finishing second in the WSOPE Main Event and taking the bounty tournament at the EPT Madrid, Melanie Weisner enjoying deep runs in the EPT Madrid and EPT Copenhagen Main Events, Nicky Evans capturing the Fallsview Poker Classic in Ontario and Kevin “Civelus” Vandersmissen taking down the Irish Poker Open.

In addition to the prizes available in each guaranteed tournament, a leaderboard competition will be running alongside the LOCKOPS event to reward the one hundred most consistent players with entry into an exclusive Lock Poker tournament. Positions on the leaderboard will be determined using a formula which considers the buy-in for each tournament, the number of players entered and the final placing on each player, with a bonus multiplier for reaching the final table. The winner of each LOCKOPS Event will also be invited to compete in a special Champion of Champions Tournament with two seats at the World Series of Poker Main Event up for grabs.

The Lock Online Poker Series coincides exactly with PokerStars “Spring Championship of Online Poker” (SCOOP) and the exclusive Lock Poker tournaments have been organised so that breaks in the LOCKOP games synchronise with those being played on PokerStars. The tournament schedule starts with a $200,000 guaranteed NL Hold´em 6-Max event and concludes with a $500,000 guaranteed Main Event and a $200,000 guaranteed Highroller tournament. Between the feature tournaments, more than $1 million is available for winners of the Lock poker Online Series – for which satellites are already running on the Lock Poker web site.