Samuel Rodriguez leads the Main Event in Barcelona by a wide margin in his first ever European Poker Tour Event with just 24 players remaining. 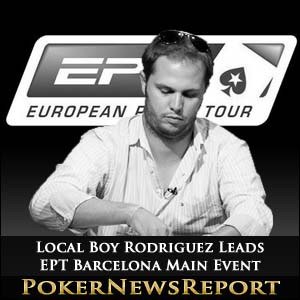 Samuel Rodriguez leads the Main Event in Barcelona by a wide margin in his first ever European Poker Tour Event with just 24 players remaining.

After Wednesday´s chip leader – Antonin Duda – had admitted he had been lucky, another EPT novice displayed remarkable good fortune on Day 4 of the Main Event to rack up a colossal chip stack and lead the Main Event by more than 200 big blinds.

Samuel Rodriguez entered the tournament via a €100.00 satellite only because the event was being played in his home city and has already achieved an amazing ROI – being guaranteed a minimum cash of €24,900, but probably much higher.

Entering Day 4 of the EPT Barcelona Main Event in second position, Rodriguez did not enjoy the best of the cards during the first few levels – leaking more than 400,000 chips from his starting stack of 1.4 million chips to table companions Daniel Rudd, Ilan Boujenah and Pedro Piazuelo.

However, as Level 21 commenced (blinds 6,000/12,000 – ante 1,000) Rodriguez fought back and was responsible for a number of eliminations – including that of Eddie Tasbas (K♣ Q♣), who got his chips into the pot on a queen-high board  only to be eliminated by Rodiguez´ pocket Kings.

However, according to Rodriguez, his pivotal hand was one against Ilari Sahamies when, intending to call, Rodriguez accidentally put too many chips into the middle. He was then forced not only to raise, but also to call another raise from Sahamies. However his error worked out magnificently as he had accidentally swelled a pot he would go on to win.

Rodriguez (5,330,000 chips) is followed on the leaderboard by Australian professional poker player Jonathan Karamalikis (3,085,000 chips) – who won the biggest pot of the tournament so far when his K♥ K♦ held against Felix Kretchmann´s A♣ Q♦ for 1.5 million chips – and Belorussian Mikalai Pobal, who bust Jakob Moesslacher (9♥ 8♥) towards the end of play when his A♥ K♣ paired with the A♣ on the flop and A♦ on the turn to chip up to 2,745,000 chips.

Further back in the field, Day 3 chip leader Antonin Duda (2,054,000 chips) is still well-placed for a final table assault, John Juanda (1,644,000 chips) has been getting quietly since his early prominence, and Lucille Cailly retains a top ten position with 1,431,000 chips. When play resumes at the Arts Hotel in Barcelona, blinds will be 10,000/20,000 (ante 4,000) and play will continue until just the final table of eight players remain.