David Breitfuss – a local poker player yet to cash in a live event outside of his native Austria – leads an impressive line-up after Day 1A of the WPT Vienna Main Event. 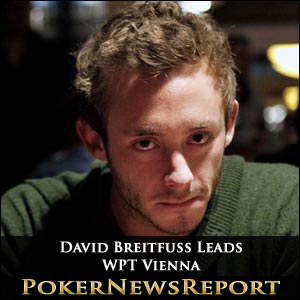 David Breitfuss – a local poker player yet to cash in a live event outside of his native Austria – leads an impressive line-up after Day 1A of the WPT Vienna Main Event.

Top poker players such as Chris Moorman, ElkY Grospellier and Jonathan Duhamel all sit in the shadow of Breitfuss´ impressive 185,500 chip stack – a healthy 10 big blinds ahead of Germany´s Michael Eiler and Marc Gork.

Good Turnout for Day 1A

An impressive 163 players entered the Main Event tournament on Day 1A, safe in the knowledge that if they bust out, the opportunity exists for them to re-buy into Day 1B. Among the 90 to lose their chips and be faced with the decision of whether to stump up a further $3,500 are Mike Watson, Martin Jacobson, Vanessa Selbst, Steve O’Dwyer, Andy Frankenberger, James Akenhead, and Faraz Jaka.

The Catsuit Bet Rolls Over 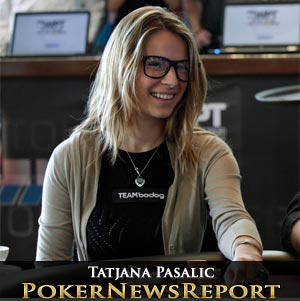 Two players who will definitely be re-buying into the event are the poker pairing of McLean Karr and Bodog Poker´s Tatjana “TattyTats” Pasalic. The couple had a side-bet on the tournament that whoever was to bust out first would have to wear a catsuit on Day 1 of the WSOP Main Event. That honour initially went to McLean Karr, but under pressure from the many male poker players who would rather see the shapely Tatjana in a tight-fitting costume, the two have agreed to replay the bet on Day 1B.

Who Said “Get Caught Bluffing”

It is not often that ElkY Grospellier gets outplayed at the poker table, but that is exactly what happened yesterday at the Montesino Casino. With blinds of 400/800 (ante 100) Marc Gork raised to 1,600 from the hijack seat. ElkY, on the button, was having none of it and three-bet for 5,300 chips. Gork called and the pair saw the flop of A♣ J♥ 4♠.

Gork checked, but ElkY pushed another 5,500 chips into the pot. Gork called and the players saw the Q♦ land on the turn. Both players checked the Queen, but following the 6♠ river card, Gork became the aggressor and bet another 5,500 into the pot. ElkY raised to 14,200 and after a moment´s hesitation Gork made the call with J♦ 9♦ for third pair. ElkY´s cards went into the muck so quickly, nobody ever found out what they were.

Leaders of the Pack

It is unusual that a Day 1A chip leader makes a significant contribution to a major tournament because so many chips are in play in Day 1b. Nonetheless, we wish the current leaders the best of luck for the remainder of the WPT Venice Main Event which last year saw 555 players take their seats – a WPT European record – and paid $629,847 to winner Dmitry Gromov.