LiveAce.com has announced that its operating costs have exceeded its revenue, forcing the online poker site to suspend operations. 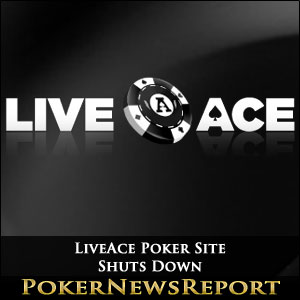 LiveAce.com has announced that its operating costs have exceeded its revenue, forcing the online poker site to suspend operations.

The site launched in August as a hybrid of sorts between free-play and subscription-based. Players were given chips to play at no cost, but a monthly subscription of $19.99 gave subscribers considerably more chips and a few other perks such as an odds calculator and custom avatar.

LiveAce catered to U.S. players in more than 30 states, legally operating in U.S. jurisdictions that permit sweepstakes. Action at the site was restricted to ring games in no-limit and fixed-limit hold’em, as well as pot-limit Omaha. Two-time WSOP gold bracelet winner Andy Frankenberger was the site ambassador.

A unique approach was attempted by LiveAce founders, allowing players to convert play chips into cash at a daily auction. Players were allowed to place bids on cash prizes with chips won at the tables. Unsuccessful bids were never at risk and players who submitted non-winning bids simply had their chips returned to their LiveAce accounts. Those players could then bid again the following day.

The concept sounded intriguing as a way to get play-money players to take the action a bit more seriously with the prospect of converting play-money into cash. It gave free chips a modicum of cash value not typically seen at play-money poker sites. But it obviously didn’t find favor with players considering the site closed after only about four months in operation.

A notice at the LiveAce.com website informs players of the suspension of play and assures that player accounts containing cash balances from auction winnings will be honored until March 1, 2014. Unused subscriptions of members will also be refunded.

Players wishing to claim their cash or refunds must do so via snail mail with full instructions available at www.liveace.com. No electronic communications will be accepted.