Little One for One Drop Slated for 2013

WSOP announced that a $1,111 buy-in event with unlimited rebuys over two days will be on the schedule next year, with the $1 million buy-in returning in 2014. 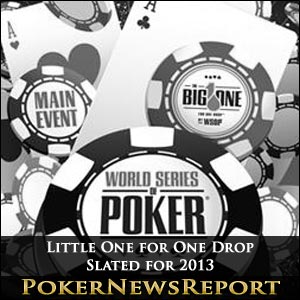 WSOP announced that a $1,111 buy-in event with unlimited rebuys over two days will be on the schedule next year, with the $1 million buy-in returning in 2014.

This year’s $1 million buy-in Big One for One Drop tournament that allowed Antonio Esfandiari to become poker’s all-time money winner by taking the first place prize of over $18 million was a huge success. Restricted to 48 players, the event raised $10 million for charity, of which $5.3 million went to One Drop to provide relief to impoverished countries that lack clean water supplies.

The $1 million buy-in will take a hiatus for one year, WSOP and Caesars Entertainment officials announced. But in its stead on the 2013 schedule will be the Little One for One Drop. With a much lower entry fee and unlimited rebuys, group organizers are hoping the gold bracelet awarding event will attract a huge number of entrants who re-enter upon busting out.

It’s amazing what you can achieve when you dream,said One Drop chairman Guy Laliberté, who also founded the Cirque du Soleil. We took the concept of a $1 million poker tournament and turned it into the most successful poker initiative ever held. As a result, over 100,000 people will be positively impacted. Projects in Honduras, El Salvador, and West Africa have already put to use the money we raised in the initial event. With the ‘Little One’ and ‘Big One’ on the horizon, we can continue to greatly impact the lives of those in need.

Poker players in general have quite a history of supporting charities through tournaments. One Drop and WSOP will encourage players to donate 1% or more of their winnings to charity during 2013 WSOP events.

The $1 million entry fee Big One in 2014 will also restrict the number of entrants. However, with two years to prepare, event organizers are planning many satellite tournaments for players to win a seat to the exclusive event. Because of the large buy-in, this year’s event saw a number of wealthy non-professional individuals enter the tourney. While that goes a long way to the charitable aspect of the event, some argue that it is not entirely good for poker because the rich players with money to throw around are not on the same level as the pros such as Esfandiari and Sam Trickett — the second place finisher. So the field for 2014’s tourney may look a bit different.