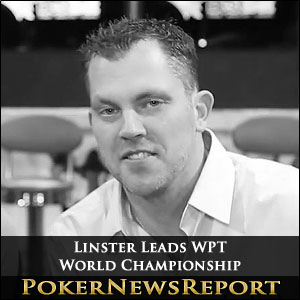 After two days of action at the Bellagio in Las Vegas, Mike Linster heads a list of some of the biggest names in live and online poker, with many more already bitten the dust in this re-entry event and kicking their heels until the cards are in the air for tomorrow´s WPT Super High Roller.

Mike Linster is a name which has cropped up regularly in World Poker Tour events this year. Having taken down two side events at the WPT Borgata Winter Poker Open and final tabled a third, Linster then went on to take down the WPTBestbet Open Main Event in Jacksonville (for which he won his seat at the WPT World Championship) and cashed earlier this month at the WPT Canadian Spring Championship in Kahnawake.

Only five 90-minute levels were played on each of the first two days to ensure that there are some players left for Friday´s Final Table (the event was scheduled according to the whim of the TV company). Mike Linster leapt into the chip lead during the third level of the day when eliminating Allyn Jaffrey Shulman – the only woman to enter the tournament – 55 > AK, and then confirmed his place at the top of the chip counts in the penultimate hand of the night when rivering an Ace to take 168,000 chips from David ‘Doc’ Sands.

Linster is pursued on the WPT World Championship leaderboard by Dan Shak – who rivered a Broadway straight in the second-last hand of the night to bust Matt Waxman´s flopped two pairs – and Antonio Esfandiari, who flopped trip Nines to double up against Ryan D’Angelo (A♥ Q♦). Further down the field, Phil Hellmuth made his habitual late arrival and instantly bust Bill Klein (Q♦ Q♣ > J♦ J♠) to finish the day with 307,000 chips, but there was no such joy for Phil Ivey – who entered even later than Hellmuth and blew his 100,000 starting stack in less than one level.

Looking ahead to Day 3 of the WPT World Championships

When play resumes at the Bellagio this afternoon, players will be starting Day 3 of the WPT World Championship on Level 11 (blinds 1,500/3,000 – ante 500). Only the top fifteen players will cash in the event, so expect a fairly tense day of action as players position themselves for a run at the Final Table on Friday. Those who have a significant chip advantage include:-