Denmark´s Jimmy Rasmussen took down the first leg of the Grand Live Tour in Malta with victory over Michael Harder after a close heads-up climax to the event. 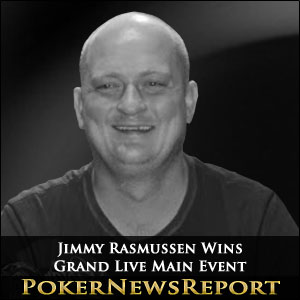 Denmark´s Jimmy Rasmussen took down the first leg of the Grand Live Tour in Malta with victory over Michael Harder after a close heads-up climax to the event.

The conclusion to the Grand Live Main Event in Malta was as thrilling an encounter as any of the live poker tournaments played over the weekend, with victory in the €1,100 buy-in Main Event ultimately going to Denmark´s Jimmy Rasmussen.

The heads-up pairing of Rasmussen and Michael Harder would have been difficult to predict at the start of the day as, when the nine remaining players took their seats at the Portmaso Casino in Malta, the pair where fifth and eighth respectively in the overnight chip counts:-

Doubling Up Does Not Always Pay

Immediately the table was back from their first break, Ellert Assen (A♦ Q♦) doubled up through Philip Sirback (A♠ K♥) when Assen hit three diamonds on the board; Heikki Kinnunen (9♠ 8♠) was the first player to bust out when calling Pim Van Wieringen´s shove with A♠ Q♦, and then Assen was himself to depart the final table after being crippled by Michael Harder (J♥ J♣ > A♥ K♥) and then eliminated by Van Wieringen A♥ 10♣ > 8♣ 2♥.

Overnight chip leader Thomas Lind (Q♣ J♥) perished at the hands of Michael Harder (A♥ K♣) before Valtteri Merikallio caught a pair of Aces on the River to double up (again) against Philip Sirback. Sirback recovered with a couple of unanswered shoves of his own before getting a call from Pim Van Wieringen. Van Wieringen was in front when the cards were turned on their backs (Sirback – A♠ Q♦ / Van Wieringen – 10♥ 10♦), but the A♥ on the flop sent the chips in Sirback´s direction and Pim Van Wieringen left the table to go and start a pool party.

The action did not slow down through the next level either (Level 26 – blinds 15,000/30,000 – ante 4,000). Day 2 chip leader Emil Alander took the biggest pot of the tournament to date when he and Michael Harder both hit gutshot straights on the River (Alander had the better straight of the two), but Michael Harder bounced back almost immediately with a double-up against Philip Sirback (Q♣ Q♠ > A♣ 3♠).

Valtteri Merikallio doubled up (again) in Level 27 with A♦ 7♦ over Emil Alander´s Q♥ 9♣, but relinquished a stack of his chips to Jimmy Rasmussen – who was getting more active without finding many callers. Eventually, Jimmy Rasmussen (K♠ K♦) was in a position to call Philip Sirback´s (3♥ 3♣) shove, and the Kings held to eliminate Sirback in fifth. As level 28 began (blinds 25,000/50,000 – ante 5,000), there was a clear distinction between the two chip leaders and the two short stacks:-

Neither of the top two players in the chip counts were able to stamp their authority on the Grand Live Malta Final Table – Michael Harder flopping a pair to double-up against Emil Alander 10♥ 8♥ > A♠ 5♥ and Valtteri Merikallio also flopping a pair (again) to double up against Jimmy Rasmussen K♦ 4♦ > K♣ 8♥.

Valtteri Merikallio´s luck couldn´t hold out forever, and he was the next player to leave the tournament despite pairing his Jack (J♦ 9♦) on the River – not enough this time to save him against Emil Alander´s flopped set of Sixes. Alander temporarily took the chip lead, but a pattern emerged where every time Alander was making a pre-flop raise either Rasmussen or Harder would shove into him, and eventually Alander called one of Harder´s shoves – losing A♦ K♥ > A♠ 9♣, and being sent to the rail in third.

Despite starting the heads-up with a narrow chip disadvantage (2.4 million -v- 2.7 million), Jimmy Rasmussen took the initiative and took the lead in the early stages of the Grand Malta Live climax. Michael Harder fought back in a “top pair over second pair” hand (A♠ 9♠ > J♥ 8♠) to gain the chip lead once again, but forfeited the advantage back to Rasmussen following two big post-flop bets by the Dane.

Both players were using post-flop aggression to take down big pots without a showdown – and the advantage swung back and forth several times more – before Michael Harder (A♥ 6♣) changed the pattern and moved all-in for his last 1.5 million chips. “Alright, let´s go” said Rasmussen – calling with Q♠ 10♥.

255 players ponied up the €1,100 buy-in or qualified online for the first leg of the Grand Live Tour (previously known as the Grand Series of Poker/GSOP). The top 36 players cashed in the tournament, with those who made an appearance at the final table taking home the following amounts:-