Garrett Levrini leads the bumper field at the end of UKIPT London Day 1A after “getting it quietly” throughout the ten levels of play at the Connaught Rooms. 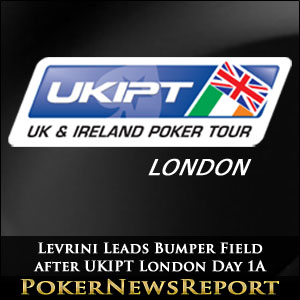 Garrett Levrini leads the bumper field at the end of UKIPT London Day 1A after “getting it quietly” throughout the ten levels of play at the Connaught Rooms.

An incredible 353 players turned up at the Grand Connaught Rooms in London´s West End yesterday to compete in Day 1A of the £770 buy-in UKIPT London Main Event – far more than were expected considering that the UKIPT Isle of Man concluded just a few days ago and the EPT London Main Event gets underway on Sunday.

Consequently, despite advice on the PokerStars blog for players to get their PSLive and Hippodrome Friends cards in good time, some lengthy queues formed as players tried to register for the event. Thankfully everybody got seated without too much of a delay and any delays that they experienced did not prevent an exceptional day of poker.

Stars Out in Force to Support UKIPT

The turnout for the opening flight of the UKIPT London Main Event attracted many familiar faces. Jake Cody, Liv Boeree and Matthias De Meulder represented the event´s sponsor – PokerStars – and Vladimir Troyanovskiy made a quick appearance after narrowly missing out on a substantial cash in the WPT Alpha8 won on Tuesday by Dan Colman.

Unfortunately for the majority of these players, their presence failed to extend to the end of the day (only 91 of the original 353 players carry chip stacks forward to Day 2), while Max Silver sits at the bottom of the chip counts with just over half his starting stack (13,400 chips) with blinds on Day 2 starting at 800/1,600 (ante 200). Good luck Max!

Levrini Leading but Gordillo the Man to Fear

However, one player that everybody should be wary of sits in fourth place with 202,600 chips – Pablo “gordijú” Gordillo. Gordillo is the Spanish player who moved to London to escape Spain´s ludicrous online poker legislation, and who was rewarded by taking down three PokerStars majors in one day at the end of September. Yesterday, Gordillo showed that his online success was no fluke by battling it out against Matthias de Meulder and top US player (also moved to London) Ilias Macropoulos Lalaounis to be in a good position for a first live poker success.

Looking Ahead to Day 1B of the UKIPT London

Unlike the recent UKIPT Isle of Man Main Event, players who bust out on Day 1A of the UKIPT London Main Event do not have the opportunity to re-enter. Consequently there will be a hall full of fresh faces when play gets underway at the Grand Connaught Rooms at noon today.

The word from PokerStars is that more than 300 players have already pre-registered for today´s action, and the potential exists for last year´s attendance of 747 to be smashed out of sight. However, with the buy-in for the UKIPT London Main Event having being reduced, it remains to be seen whether the winner of the tournament collects as much as Robbie Bull did (£113,405) for his victory in this event last year.