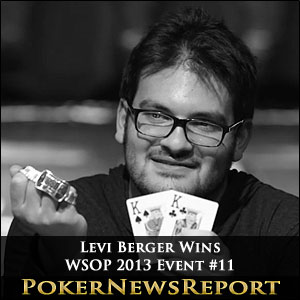 David Gonia was the first player to be eliminated from the final table after he was beaten by the eventual champion. Gonia reraised Berger’s bet all in for 396,000 before the flop, which was called by the Canadian. Berger showed A♠ J♦ while Gonia was outkicked with A♣ 9♥. While both players hit Aces on the flop, Berger turned a straight and Gonia was sent packing in sixth place.

Next to go was Jacob Bazeley, who was also eliminated from the tournament after losing a hand to Berger. Berger, who had 3♣ 3♥, hit a set on the flop while Bazeley, who had Q♠ J♣ flopped a pair of Queens. Bazeley reraised Berger all in after the flop, which was called by Berger and Bazeley was knocked out of the event after the 7♥ on the turn and 5♠ on the river did nothing to help him.

Berger then went on to make it three in a row when he knocked Eddy Sabat out of the event in fourth place. Sabat called all in with A♣ 9♦ after it appeared Berger may have been trying to bluff with 5♣ 3♠.

Despite being behind before the flop, Berger managed to hit trips after the flop showed 3♦ A♠ 3♥, which were good enough to win the hand after the turn and river was unable to save Sabat.

Clements was able to boost his stack shortly after Sabat’s elimination after winning a massive pot against Berger. The hand lowered Berger’s stack to a little less than 1.5 million chips, and he had the shortest stack of the remaining three players for some time after.

He would stay resilient, however, and brilliantly increased his stack after winning a showdown that effectively ended Ben Palmer’s time in the tournament. After all players called pre flop, Palmer and Berger raised and reraised each other before engaging in a showdown when the flop came 9♣ 4♥ 3♠ .

Palmer showed K♠ (9d} for top pair, but was beaten when Berger showed 4♦ 3♥ for a Two Pair. The turn came 5♣ while the J♣ came on the river, giving Berger the hand and boosting his stack to around 3.3 million chips. Palmer was reduced to just 5,000 chips and was forced to go all in the very next hand via his ante.

Berger finished the job he started the hand before and formally eliminated Palmer from the tournament after hitting a pair of Kings with his K♣ Q♥, which beat Palmer’s Ace High. He was also able to gain the chip lead from Clements in time for heads-up play.

After the lead changed hands a few times earlier on, Berger was able to regain a solid lead and eventually made a clean sweep of the final table as he eliminated Clements. The last hand of the event saw Berger raise to 100,000 which Scott Clements called from the big blind.

The flop came 8♦ 7♠ 2♠ and Clements, first to act, checked to Berger who bet 90,000. A battle of reraises then occurred between both players before Clements went all in, which was snap called by Berger, who showed K♣ K♠.

Clements, on the other hand, showed 10♥ 9♠, giving him an open ended straight draw. The 4♦ on the turn and the 5♣ on the river did not give him the outs he needed and he was knocked out of the tournament.

The elimination ended the tournament and Berger was crowned the winner. The WSOP Gold Bracelet award to him is Berger’s first.