Victory in the EPT Barcelona Main Event ultimately went to German poker player Andre Lettau – but only after a marathon 15-hour grind at the final table. 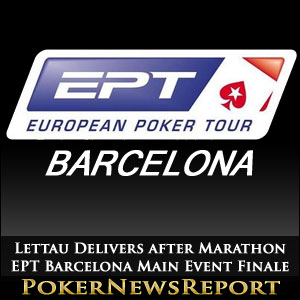 Victory in the EPT Barcelona Main Event ultimately went to German poker player Andre Lettau – but only after a marathon 15-hour grind at the final table.

#EPT100 has been breaking records throughout the series in terms of numbers attending EPT Barcelona and the prize pools being created, and it looked for most of yesterday (and the early hours of this morning) as if a new record was going to be set for the longest final table of a European Poker Tour Main Event.

However, after ten levels of action and 273 hands, Andre Lettau found the cards to beat his heads-up opponent Samuel Phillips just before 6:00am – falling three hours and thirty-eight hands short of the record set by Antonio Buonanno when the Italian won the EPT Grand Final in Monaco back in May.

The first departure from the final table came shortly after, when Slaven Popov (A♠ 7♠) failed to connect with the board and was eliminated by Ji Zhang´s pair of Queens, but Zhang took a massive hit to his chip stack in the next level of play when Andrey Shatilov doubled-up with K♦ K♥ > Zhang´s Q♥ Q♠.

The quick elimination of three players during Level 34 reduced the final table of the EPT Barcelona Main Event to just four players. Ji Zhang was the next player to be sent to the rail after moving all-in with A♦ K♦. Hossein Ensan isolated Zhang by moving all-in over the top with J♦ J♣; and although Zhang paired his Ace on the flop of J♥ A♣ 9♦, Ensan´s pair of Jacks had improved to a set and Zhang was bust in seventh place.

Hossein Ensan then moved to within 5 million chips of Samuel Phillips when turning a Full House to best the chip leader´s flopped Ace-high straight, but Phillips wasted no time in forging ahead once again – eliminating Kiryl Radzivonau in sixth place K♣ 10♣ > Q♠ J♥, flopping a pair of Jacks to take a substantial pot from Andrea Dato J♥ 10♣ > K♣ Q♥ and then gaining revenge on Ensan for the earlier Full House > flopped straight hand with A♦ 10♦ > K♣ 9♥ (after the flop of 2♦ K♦ A♥).

Andre Lettau was also involved in the action – eliminating Andrey Shatilov A♠ J♥ > K♠ 10♠ after Shatilov had missed all his outs on the board of 6♠ 8♣ Q♣ / J♠ – and, going into the break at the end of Level 34, the respective chip counts looked like this:

The elimination of the Andrea Dato had started discussions about a deal, and these discussions stopped and started several times before it was eventually agreed that Samuel Phillips would get €1,021,275, Andre Lettau €704,058 and Hossein Ensan €652,667, with €90,000 left over for the winner.

The deal immediately resulted in Andre Lettau and Hossein Ensan ramping up the aggression. Lettau forced Samuel Phillips out of a 6 million chip pot after rivering an Ace-high Flush (A♠ 7♠ > A♥ J♣), while Ensan doubled up against Phillips 2♥ 2♠ > A♠ Q♦. However, when Lettau and Ensan clashed, it was Lettau who twice came out on top – doubling up against his compatriot 3♣ 3♥ > A♣ 10♣, before eliminating him in third place K♠ Q♣ > K♥ 9♠.

The heads-up conclusion to the EPT Barcelona Main Event started on hand #132 during Level 36 (blinds 200,000/400,000 – ante 50,000) with Andre Lettau having a 37.55 million -v- 7.3 million chip advantage over Samuel Phillips. However, Phillips doubled up in the first hand A♥ A♦ > A♣ 6♣ to reduce the deficit and initiate a sensational comeback that saw him take the lead within six hands after his 3♥ 3♦ had flopped Quad Threes.

Andre Lettau regained control when his pocket Sixes flopped a set against Phillips A♥ J♥, but the chip lead changed hands once again when Samuel Phillips took down a 7.65 million chip pot with A♣ K♦ > A♥ 5♦. The change in leadership continued throughout Level 37 (blinds 250,000/500,000 – ante 50,000) when Andre Lettau spiked a King on the River to best Phillips´ flopped pair of Sixes (K♣ 4♠ > Q♠ 6♠), and as the climax of the EPT Barcelona Main Event continued, the decision was made to reduce the length of the levels to one hour and then forty-five minutes.

Andre Lettau maintained a 2:1 chip advantage throughout Level 38, but a sequence of small pots throughout Level 39 enabled Samuel Phillips to get much closer to the chip leader before he doubled up into the chip lead with a flopped two pairs in the last hand of the Level. Incredibly, Andre Lettau spiked another King on the River to double back K♣ 3♣ > 4♦ 4♥ in the first hand of Level 40 (blinds 500K/1 million – ante 100K) and he moved back into the chip lead with a flopped pair of Jacks just as the level ended.

Kings do the Job for Lettau

As level 41 got underway, both players now had fewer than twenty big blinds (blinds now 600K/1.2 million – ante 200K). Andre Lettau maintained his narrow chip advantage until hand #273, when Samuel Phillips moved all-in from the Small Blind with 8♦ 7♦. Andre Lettau made the call with K♣ 10♠ and became a 95% favourite to win the hand after the flop of K♥ 5♠ 2♥. The 9♥ on the Turn left Samuel Phillips needing a Six on the River for a gutshot straight, but the dealer turned over the K♥ to give Andre Lettau trip Kings and the EPT Barcelona Main Event title.