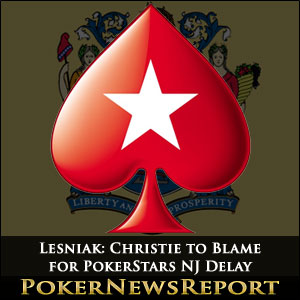 At the beginning of September, Senator Ray Lesniak made the provocative tweet that PokerStars´ return to New Jersey was just weeks away. He indicated that a major announcement was imminent which would include international poker tournaments like the Ryder Cup in golf and the possibility for online poker players in New Jersey to compete with players from the rest of the world.

Almost seven weeks after Lesniak set Twitter alight, the date for PokerStars´ return to New Jersey is still a mystery. Naturally players are getting frustrated with the situation – as geolocation and software issues continue to plague PokerStars´ main competitors in the Garden State – and some players have contacted the Senator via social media to find out what is going on.

Last night Senator Lesniak used Twitter to answer some of the questions he had been bombarded with – replying to one tweet that PokerStars´ return was waiting on Christie hopefully not like waiting on Godot (a reference to the Samuel Beckett play in which two characters wait in vain for the arrival of Godot) and replying to a second question that nothing will happen without Christie ok.

This response led to criticism of the NJ Department of Gaming Enforcement – the body supposedly with the power to approve online gaming licenses in New Jersey – and generated speculation that PokerStars´ return to New Jersey could be delayed until the Adelson Primary is resolved – a reference to a meeting held in Las Vegas in April, in which Christie went courting billionaire anti-onling gaming campaigner Sheldon Adelson for funds to pursue the Republican nomination for the presidential election in 2016.

Should Chris Christie be chosen to lead the Republican fight against Hillary Clinton for the presidency in 2016, it could be a long wait until PokerStars returns to New Jersey; and, if Christie gets elected – in which case he will owe Sheldon Adelson big time – PokerStars may never return to the Garden State at all!

… and then Tackles the NFL over Sports Betting

In addition to taking on a potential presidential candidate and the largest payment processors in the world, Lesniak is also having a running battle with the NFL over online sports betting in New Jersey. Last week Governor Chris Christie signed Lesniak´s Bill 3711, allowing online gamblers to legally place bets on sports events at casinos and at the state´s racetracks. Lesniak was so thrilled with the quick passage of the bill that he immediately declared he would take my victory lap at Monmouth Park.

However, his celebrations were quickly muted when the NFL and NCAA successful pursued an injunction against the new legislation by claiming it was in breach of the Professional and Amateur Sports Protection Act (PASPA) – a 1992 federal ban on state-sponsored sports betting. Incredibly, U.S. District Court Judge Michael Shipp agreed with the plaintiffs that online gambling in New Jersey would hurt the integrity of the game, despite most gamblers around the world being able to bet freely on NFL and NCAA action.

Senator Lesniak will now have to postpone his victory lap at Monmouth Park until November 20th – when the case will be heard at the U.S. District Court in Trenton – and probably have to wait a lot longer before he is able to play a legal game of online poker at PokerStars!