A 30-year-old architect from St. Albans has taken down one of the toughest UK live poker events, beating a field of 1,954 players to capture the GUKPT Goliath. 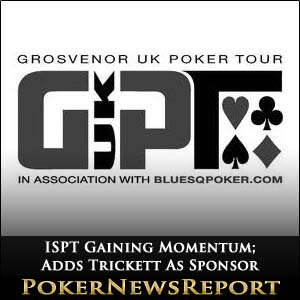 A 30-year-old architect from St. Albans has taken down one of the toughest UK live poker events, beating a field of 1,954 players to capture the GUKPT Goliath.

The Goliath may be the game for everyman, with its £100 + £20 buy-in, good level structure and easy car parking; but it takes a special kind of man (or woman) to battle through nearly two thousand players over a bank holiday weekend and walk away from the G Casino at the Ricoh Arena in Coventry with a seat at the GUKPT Champion of Champions Event and a cheque for 30 grand.

Les Fenton was that special man this past weekend – entering Day 4 of this prestigious event with a healthy chip lead, and maintaining his lead (bar once) through a fast and furious day to emerge as Champion of the GUKPT Goliath. As the nine players remaining in the event took their seats, their relative chip stacks looked like this:-

With blinds of 100K/200K and 30K antes, there was no waiting for the action to start, but it was Mark Harding who was the early antagonist – taking out Kris Graham who moved all-in with a pair of Nines against Harding´s pocket Queens, and then eliminating the unfortunate Jacqueline Burrows, who took her chance with A♠ J♣ – only to find Harding holding A♥ Q♥.

As Harding rose up the leaderboard, Philip Froggatt plummeted down. First Jon Caplan doubled up against him in an A♦ Q♦ v A♥ J♥ race in which both players hit their lower pair and then it was time for Les Fenton´s first bust of the day, when his A♣ 5♦ caught the A♦ on the turn to best Froggatt´s Q♠ 10♠ – which had caught the Q♥ on the flop!

Mark Harding picked up the elimination baton once again when an incredible flop of 10♣ J♦ A♣ helped his K♠ Q♦ overcome Gavin Manley´s A♠ J♠, but from there on in it was Les Fenton all the way. First he disposed of Colin Inskip when his A♣ high was good enough to master Inskip´s 10♦ 8♦ and then Jon Caplin was sent to the rail when his K♦ 6♠ failed to improve against Fenton´s pocket Sixes.

The last woman standing – Sung yee Hun – was Fenton´s next victim after she had shoved her final 5 million chips into the middle with K♥ 10♥. Unfortunately for Sung, Les Fenton was staring at A♦ J♥ which held on a board of 5♥ 6♥ 6♠ / Q♠ / Q♦ and sent Les into the heads-up against Mark Harding with a 30 million v 18 million chip advantage.

Despite the discrepancy in the chip stacks, a deal was brokered which saw each player receive £26,610 – with the remaining £4,600 to play for plus the seat in the GUKPT Champion of Champions tournament. As it was, the finale lasted just one hand – Mark Harding choosing to shove with A♠ 7♦ and Fenton calling with A♦ 10♠. The flop and turn of 8♣ J♥ 8♥ / 9♥ meant that if either player´s lower card came out on the river, the other player would make a straight….. and that is exactly what happened – the 7♥ pairing Harding´s hand but giving Fenton the straight and title of GUKPT Goliath Champion.