A good field turned out for Day 1A of the UKIPT Edinburgh Main Event and, after eight levels of action, Leon “FlippetyFlop” Louis is the current chip leader. 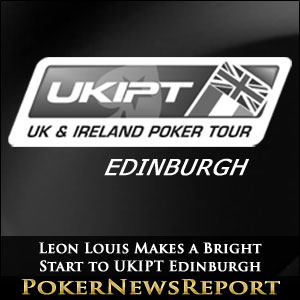 A good field turned out for Day 1A of the UKIPT Edinburgh Main Event and, after eight levels of action, Leon “FlippetyFlop” Louis is the current chip leader.

Yesterday saw the resumption of the PokerStars-sponsored United Kingdom & Ireland Poker Tour, as 116 players braved the January weather in Edinburgh and ponied up the £1,100 buy-in for the UKIPT £500,000 guaranteed Main Event.

Players such as Max Silver and Jake Cody received a warm welcome after cashing in the primary events of the PokerStars Caribbean Adventure; but there were no favours shown at the tables for the two most famous players to show their faces yesterday – and both were sent to the rail before the half-way stage of the opening day.

However, the home contingent woke up as the blinds continued to increase and, going into the final level of the day, local player Brian Tannerhill was on top of the chip counts. Unfortunately Tannerhill failed to bluff Tomasz Raniszewski out of a 10,000 chip pot just before the close of play, and he bagged and tagged 95,900 chips to finish Day 1A of the UKIPT Edinburgh Main Event in fourth place.

Thereafter, it looked as if Thomas Ward would end the night as chip leader after his pocket Aces improved to a Full House to bust Phil Baker but, when the chips were counted at the end of Level 8, Leon Louis had edged him out courtesy of a massive hand against Ian LeBruce in which Louis´ pocket Kings held against LeBruce´s Ace-Jack after a Jack-high flop.

Looking Ahead to Today´s Action

Today sees the second opening flight (Day 1B) of the UKIPT Edinburgh Main Event, and organisers will be hoping that at least 384 players walk through the doors of the Assembly Rooms in order to avoid the embarrassment of an overlay

Several big names are scheduled to join the online qualifiers and UKIPT regulars today, including Liv Boeree and Dale Philip – who have just flown back from the Bahamas after enjoying success at the PokerStars Caribbean Adventure.

Vicky Coren-Mitchell will also be representing Team PokerStars (having travelled all the way from Belsize Park) and Rob Yong has donned his bus driver´s cap to bring a coach load of Dusk till Dawn qualifiers up from Nottingham.

You can find out how the UKIPT Edinburgh progresses by following @PokerNewsReport on Twitter.