Another attempt is being made to clear the muddy waters of online poker legislation in South Africa with the introduction of a Remote Gambling Bill. 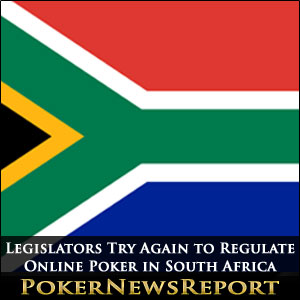 Another attempt is being made to clear the muddy waters of online poker legislation in South Africa with the introduction of a Remote Gambling Bill.

Depending on which opinion you listen to, online poker in South Africa is legal under the National Gambling Amendment Act of 2008 – or illegal under the Tuchten ruling of 2010 in Casino Enterprises (PTY) Ltd -v.- the Gauteng Gambling Board.

The National Gambling Amendment Act of 2008 established a framework for the government to issue operating licenses to companies wishing to provide an online product in South Africa. None have been issued yet because the Act is subject to a legal challenge from brick and mortar casinos fearing a cannibalisation of their trade.

The Tuchten ruling banned a Gauteng-based land casino from offering an online product to its customers, but also made it illegal for operators outside of South Africa to provide an online product to residents of South Africa. This verdict is also under appeal but, with no operating licences yet issued by the country´s Department of Trade and Industry, online poker and other forms of online gambling in South Africa are technically illegal with the exception of a couple of State-sanctioned sports betting sites.

Geordin Hill-Lewis is the shadow Minister for Trade and Industry, and last year he introduced a private members bill – the 2014 Remote Gambling Act – with the aim of providing a legal base for the regulation of online gambling in a responsible manner, which would please both the brick and mortar casinos and the ruling African National Congress Party.

The Act would make each of South Africa´s nine provinces responsible for issuing online gambling licenses and monitoring the activities of operators, while allowing the National Gambling Board to oversee operations to ensure compliance with the Act.

His proposals were opened for public consultation at the time they were introduced and have now been amended to take concerns about underage gambling and organised crime into account. Hill-Lewis hopes that when Parliament reconvenes next month, the Bill will be sent to the Portfolio Committee on Trade and Industry for debate before being considered in the full Parliament.

There are two major issues which may hinder the progress of the Remote Gambling Act – problem gambling and the enforcement of a regulated environment over nine different states. Problem gambling is a big concern in South Africa, and last year the government tried to introduce a blanket ban on all online gambling activities to try to deal with it.

The ban was defeated because it was unenforceable, and this led to questions on how a regulated environment covering nine different states could be policed effectively – particularly when the country´s estimated 250,000 online gamblers could still get better deals on unlicensed sites operating from outside South Africa (as has been proven in the regulated European markets and the regulated States in the US).

Last year, Price Waterhouse Cooper´s “Gambling Outlook 2014 – 2018” predicted that it would be issues such as these that would prevent the regulation of online gambling in South Africa “for quite a period of time”. The gambling industry group also believed that the government would not act on regulation because of opponents to online gambling in the Department of Trade and Industry.

Let´s hope that Geordin Hill-Lewis´ proposals can sway those opposed to online gambling, and that a safe and regulated environment can be established for citizens of South Africa, so that they can enjoy playing online poker without having to worry about whether or not they are breaking the law.