Lee Nelson has a rich history of poker tournament success stretching back decades, adding the ANZPT Melbourne Main Event to his portfolio of victories last night. 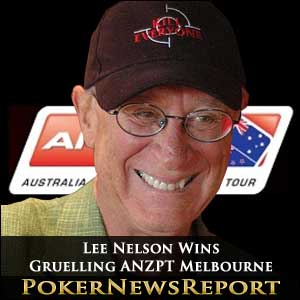 Lee Nelson has a rich history of poker tournament success which stretches back decades, and last night he added the ANZPT Melbourne Main Event to his impressive portfolio of victories.

Lee Nelson, whose list of achievements include the Party Poker World Open (2005), the Grosvenor World Masters (2006) and the Aussie Millions (2006) overcame a strong field of 310 entrants to claim the title and winner´s cheque for AU$ 156,550.

Lee is now New Zealand´s all-time highest money earner, with more than $2.35 million to his name yet Lee´s victory in the PokerStars sponsored ANZPT Melbourne Main Event came as a surprise to many. His ascendency towards a final table appearance came late in the penultimate day courtesy of a double-up against compatriot Phil Willcocks and despite a two orbit penalty for acting out of turn against an indecisive Leigh Warne.

The whole Main Event was a protracted affair – suitable only for those with extreme patience. With so many entries on only one Day 1, play had run into the early hours of the morning on both preceding days, and when the final day started there were still eleven players in with a chance. Four levels later and only eight remained, but the action was slow, with very few hands going to showdown.

Four Crash Prior to Dinner

The game turned around as it approached the dinner bell with four eliminations within the space of 45 minutes. Brett Chalhoub looked favourite to double up when getting all-in with A♦ K♣ against Lee Nelson´s A♥ Q♣ – until the Q♥ on the river delivered a fatal blow to his aspirations. In the very next hand, Stephen Eliesen found nothing to help his Q♥ 5♦ against Phil Willcock´s K♦ Q♠, and Tom Wing was soon to depart – his 10♣ 6♦ coming second to Nick Georgoulas´A♦ J♦. Phil Willcocks was soon to be crippled by Nick Georgoulas, and was then eliminated by Lee Nelson when his 10♣ 6♣ found a pair, but could not cover Nelson´s (A♣ 8♥) rivered straight

Lee Nelson went for his dinner a very happy man. He had risen from nowhere on Day 2 to be third in chips at the start of the final table, to owning more than half the chips in play at the break. With blinds at 20,000/40,000, Lee nelson knew that Karan Punjabi would be looking to shove soon after the break and was going to be ready for him.

Punjabi was indeed the first to push in only the second hand after play resumed. Getting all of his chips into the middle pre-flop with A♣ 9♥, he was called by Lee Nelson who had 10♣ 10♠. The pair held up and Punjabi was sent to the rail. Two hands later and Danny Chevalier was gone. Chevalier took a chance from the big blind with 3♦ 3♠ and was called by Lee Nelson with A♠ 10♦. The flop of A♣ 10♣ 8♣ gave Chevalier only two outs to win the hand, and neither appeared on the turn or the river. Going into the heads-up, Lee Nelson had a chip count of 4.675 million against Nick Georgoulas´ 1.345 million.

After the late finishes of the previous evenings, the heads up session was done and dusted within 15 minutes. Nick Georgoulas temporarily took a slight lead after some aggressive pre-flop raising and a successful shove with A♦ 7♦ against Lee Nelson´s A♠ 6♦. But Nelson fought back to gain his own slight chip advantage, and then moved all-in with J♥ 10♥. Georgoulas called with 4♥ 4♣, but his fate was soon apparent as the flop of 8♥ A♥ K♥ gave Lee Nelson the heart flush and the ANZPT Melbourne title.