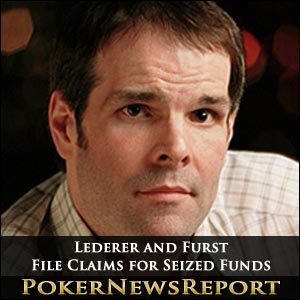 Howard Lederer and Rafe Furst, board members and shareholders of Full Tilt Poker, have followed the lead of fellow board members Chris “Jesus” Ferguson and Ray Bitar, by filing legal documents with the court in an effort to claim the funds in bank accounts seized by the Department of Justice (DoJ).

In the U.S. District Court of the Southern District of New York, Furst filed a claim that asserts title and interest in Telamonian Ajax Trust and “accordingly has a legal, equitable and/or beneficial ownership interest in property owned by the Trust, including but not limited to bank accounts and the funds therein.” The amount of the claim or in the account was not listed, but the bank is located in Switzerland.

Howard Lederer laid claim to two bank accounts, with no amounts listed for either. The first account was at the Wells Fargo Bank under the name of HH Lederer Consulting LLC, while the second account was in the Isle of Mann at Lloyds TSB International.

Ferguson filed claims earlier this month hoping to recover over $98 million that the government seized on behalf of two companies run by Full Tilt, allegedly for violating the Unlawful Internet Gambling Enforcement Act (UIGEA). Ferguson’s filing stated that a portion of the funds seized “were in the process of being returned to Full Tilt Poker players.”

The $98 million claim may be withdrawn, however, as part of the deal between Groupe Bernard Tapie (GBT) and the DoJ to enable GBT to complete the purchase of Full Tilt Poker for $80 million. If approved by Full Tilt shareholders, the dormant poker site will forfeit its remaining assets to the DoJ, who will turn around and sell the company’s assets to GBT.

“It is ultimately contemplated that the claim will be withdrawn but there are some additional events which need to occur first, primarily a deal between FTP and GBT,” said Barry Boss, a Full Tilt lawyer.

It is not known at this time whether or not Lederer and Furst’s claims will also be withdrawn as part of the acquisition agreement.