Several aspects of the proposed online poker bill of Senators Reid and Kyl has many observers questioning some of the bill’s provisions. 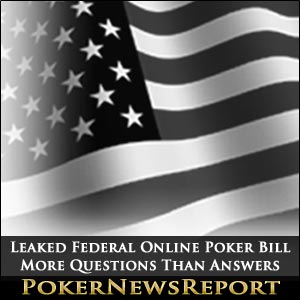 Several aspects of the proposed online poker bill of Senators Reid and Kyl has many observers questioning some of the bill’s provisions.

Although only a summary of the proposal is now available to the poker community, many players have questioned several provisions within the document and are left wondering whether or not the proposal has any chance of becoming law in its current form. The first order of business under scrutiny is the blackout period that forbids licensees to have online poker sites up and running “until at least 15 months until the date of the bill’s enactment.” Intended to keep any one online poker site from getting a jump on any other, this provision means that legalization would not take hold until sometime in 2014. Obviously, this is not a beneficial time frame as far as players are concerned and may seem like an eternity for those who have been shut out from playing since Black Friday.

The deal in which PokerStars purchased the assets of Full Tilt through the U.S. Department of Justice specifically allows both sites re-entry into the U.S. marketplace, but the Reid/Kyl proposal aims to punish sites that “were involved in offering Internet gambling to United States residents after 2006 (following enactment of UIGEA)” by prohibiting them from offering services to the American market for five years. Whether or not this “bad actor” provision is good for online poker is sure to be heavily debated. However, PokerStars was able to become the top online site the world over due to flagrantly ignoring the Unlawful Internet Gambling Enforcement Act and some sort of punishment does seem justifiable to many.

Another controversial aspect of the proposal is the exclusion of players from countries outside of the U.S. This will severely cripple player liquidity and is one element to the proposal that really should be reconsidered. The reason behind such a scheme is to keep control and regulations within U.S. jurisdictional borders and is intended to safeguard players from ever going through a Full Tilt fiasco with unregulated poker sites again. Wanting to protect U.S. players and their funds is obviously beneficial to all. But doing so by restricting participation to allow only U.S. players to compete against one another and forbidding international involvement is not the answer.

Allowing states to opt-in at their discretion does appear to be a workable solution as opposed to blanket federal legislation across all 50 states. There are some states who may not want to participate, such as Utah, which has already passed regulations to opt-out of any federal online gambling scheme. Players who happen to reside in a state that elects not to participate in online poker would seemingly have no other choice but to relocate.

The chances of the bill gaining passage in its current form without any modifications or amendments is likely slim. The recent public dispute between Senators Reid and Heller over whether or not the bill should first be introduced in the Senate or House of Representatives is indicative of the difficulty likely to be encountered in gaining Congressional approval of the Reid/Kyl federal online poker bill. Many now believe the bill won’t be considered until after the elections in November.