Leaf announced that they would come out with a series of high-end trading cards which will feature poker player bios, autographs, and information about some of the best players today. 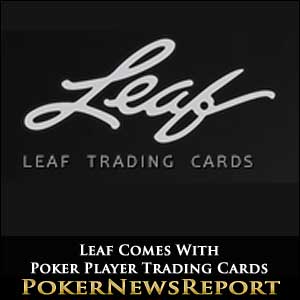 Leaf announced that they would come out with a series of high-end trading cards which will feature poker player bios, autographs, and information about some of the best players today.

Collecting trading cards is one of the more popular things for sports fans to do all across the world, and now it has been introduced to the poker world as well. Football, basketball, baseball, and many other types of trading cards have done very well in the past, as they offer players autographs, limited edition cards, and many other things to collect.

The poker player trading cards will be done a bit differently than most other sports’ trading cards are done, as each box will include only ONE pack of cards, with only FIVE cards in each pack. The difference between these packs and regular packs of cards, is that each of the five cards with be an autographed card for one of the biggest names in poker.

The cards will be released starting on October 15, 2011, and will also have “celebrity cards”, which are signatures from names like Jason Alexander, Brad Garrett, Lou Diamond Phillips, Jose Canseco, and Orel Hershiser.

Some of the other additional things that you will find with the new Leaf poker trading cards, are “final table signatures”, which are autographs that are on poker table felt. Also, there is something called the “nine clover cards”, which there will only be nine made in the entire world, and the collectors of these cards get the chance to play in a nine handed online poker tournament. The winner of this poker tournament will receive a 2006 World Series of Poker gold bracelet, which is valued quite a bit more than a box of trading cards!

These new Leaf poker trading cards should draw quite a bit of attention from not only poker fans and fans of the World Series, but also trading card collectors in general.  Both sides will have a great reason to collect these, as fans get the chance to get autographs from some of their favorite names in poker, while trading card collectors will get incredibly rare poker player autographs from many different names in poker today.  Overall, these cards should be a hit when they are released later this year.