Rep. Joe Barton, who has proposed federal online poker bills in the past without success, believes his new measure will one day gain approval. 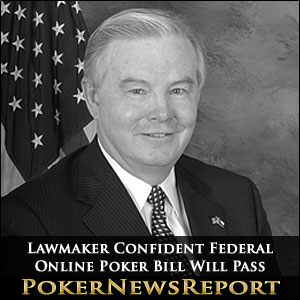 Rep. Joe Barton, who has proposed federal online poker bills in the past without success, believes his new measure will one day gain approval.

The Texas Republican has not yet introduced his online poker bill this year, but he does plan to do so shortly. The measure will be limited to poker-only. Rep. Peter King (R-NY) recently proposed federal online gambling legislation that includes online casino games in addition to poker. Many insiders believe that King’s proposal will fail to gain any ground in the legislative process.

Barton readily admitted that online poker is currently played extensively throughout the U.S. despite laws in 2006 aiming to prevent it and the Black Friday crackdown in 2011 that has tied up player funds for more than two years. Barton bemoans the fact that no safeguards are currently in place, except for Nevada, for players who continue placing bets at unregulated poker sites.

Barton’s last proposal in 2012 was considered by fellow Congressmen, but failed to make any headway with the November election foremost on the minds of many of his colleagues. With those days now well behind, Barton is preparing to again make a push for legalizing online poker on the federal level.

Whether such a proposal would have a better chance of progressing by being first introduced in the House or the Senate is still a matter of contention, but Barton told Gambling Compliance that “time is on our side.” The 63-year-old legislator firmly believes that it’s more a question of when his proposal passes than if it gains acceptance among federal legislators.

The new measure will be state-friendly in that it will allow states to opt out of the nationwide online poker scheme with a short letter from the governor of any state wishing to be excluded. Barton finds it both frustrating and ironic that his home state, which spawned poker’s most popular game of Texas Hold’em, doesn’t permit the game to be played at casinos or online. He hopes that Texas chooses to opt in to his plan.

Barton admitted that he himself does not play online poker for real money. He did confess to being a great play money player, but has not yet attempted to achieve that same status playing for cold, hard cash.

Barton further stated that making laws on the federal level is a difficult process that requires a considerable amount of patience, much like the patience needed to be successful at the poker table. However, difficult is much different than impossible, and Barton is fully convinced that the passage of his bill will come about eventually.