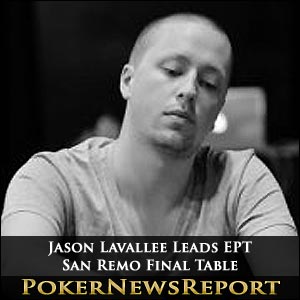 Day 5 was a long day by San Remo standards, but barely lacking in action. Even though chip leader Jason Lavallee felt that many of his table colleagues were “playing snug” and waiting for others to bust out, the fact that so many of them were well-stacked enabled a lot of limping into pots and then some explosive hands.

Forsmo´s Impatience Gets the Better of Him

Whereas explosive hands are good for some, they tend to have the opposite effect on others. Inge Forsmo – who by his own admission prefers the instant action of the online game – was one of the first players to be exploded out of the tournament on Day 5. Forsmo relinquished many of his chips in the first level of the day when Micah Raskin rivered a Seven to give him a set over Forsmo´s flopped set of Fours.

However, rather than grind his 1.2 million chip stack back up, the Norwegian moved the last of his chips into the pot on a board which read 5♦ 4♣ 6♣ / 9♦ to call Jason Lavallee´s shove. When the cards were turned over, Forsmo had called off his entire stack with A♣ 10♥ for Ace high, while Lavallee rolled over Q♦ Q♠ for an overpair. The Ace Inge Forsmo needed to keep his tournament life alive failed to appear on the river and the Day 3 chip leader was out in the most impatient circumstances.

Lavallee Builds his Lead with Houses

Jason Lavallee took his chip stack over 3 million when his Q♦ Q♣ crippled Angelo Recchia´s 9♣ 10♣ and then leapt above 4 million chips when eliminating Negjdel Avdylaj in twenty-second place. Avdylaj had four-bet all-in with J♣ J♠ and was called by Lavallee, who was holding K♦ K♠. If Avdylaj felt he was in trouble before the community cards were dealt, he was assured of his fate when the flop fell 2♣ K♠ 2♠ to give Lavallee a Full House.

Incredibly Jason Lavallee repeated hand within the hour to bust Thomas Gabriel (9♥ 7♣) in eighteenth position. Again Lavallee was dealt the K♦ K♠ and the flop on this occasion was K♥ 2♥ 2♠. Lavallee finished the day with 5,545,000 chips and the chip lead after taking a half million chip pot from Ludovic Lacay just before the conclusion of play with 6♥ 6♦ (Lacay´s cards unseen).

Lacay Has Wheels and Boats

Ludovic Lacay had been busy himself during the day. Starting the day third in chips, he maintained his position near the top of the leaderboard when flopping a wheel (2♥ 3♣ 5♣) when holding A♥ 4♥ and getting three streets of value out of Jason Tompkins. Lacay (A♥ J♠) got his chip stack over 4 million with the elimination of Carmelo Vasta (Q♥ Q♦) in an incredible hand in which Vasta rivered a straight but Lacay had already filled up Aces over Jacks.

The Frenchman then eliminated Charly Maracchione when his 8♥ 8♠ held over Maracchione´s A♠ 7♠, and would have finished the day as clear chip leader had it not been for losing one of the last hands of the day against Jason Lavallee (above). Lacay goes into the final table in a strong position with 5,366,000 chips – just 7 big blinds behind the chip leader.

Tompkins Rockets Back while Bojang is Flushed with Success

The “other” Jason in the top trio – Jason Tompkins – did not “do a Forsmo” after losing a big hand early in the day and ground his way back into contention. Getting his chip stack back over one million with the elimination of Giuseppe Cefalu (10♠ 10♦ > 8♣ 8♦) and then crippled Jonas Mackoff when his pocket Aces held against Mackoff´s A♥ K♠. Tompkins eventually built his stack back up to 3,605,000 to lay in third position overnight.

One of the most active players during the day was one of the shortest-stack when play began – Ismael Bojang. The German high-stakes cash player had started Day 5 with 619,000 chips in seventeenth place of the twenty-four that remained. However, he quickly doubled up against Jason Lavallee (9♥ 9♣ > 6♥ 6♠), took out the dangerous Yevgeniy Timoshenko when his A♥ K♣ made a straight against Timoshenko´s 7♣ 7♠, eliminated WPT Paris winner Matt Salsburg (10♣ 7♠) when the Ace in his hand paired on the flop and finished the day by hitting an Ace high flush to bust Iulian Ruxandescu (K♥ Q♠).

Final Table Set for a Feast!

When play in the EPT San Remo Main Event resumes at the Casino San Remo this afternoon, just a few minutes of Level 27 remains (blinds 25K/50K – ante 5K). In a fascinating table draw Jason Tompkins has position on Ludovic Lacay, while Ismael Bojang has position on Jason Lavallee. The other four players are not without a chance in the pursuit of the EPT title and first place prize money of 800,000 – especially with a history in this tournament of chip leaders exploding in just a few hands.