It appears that Full Tilt Poker are back in the news, nothing can stop the steady stream of revelations, criticisms and allegations that may well turn into a flood over the next few weeks. 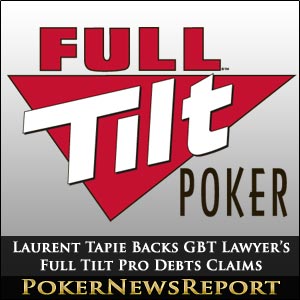 It appears now that Full Tilt Poker are back in the news, nothing can stop the steady stream of revelations, criticisms and allegations that may well turn into a flood over the next few weeks.

Now independent online gaming journal iGamingFrance have reported that GBT managing director Laurent Tapie – who is leading the proposed buyout – has backed the allegations made by the French investment firm’s lawyer, saying Dayanim’s claim that this may block the deal unfortunately is true.

Dayanim initially said that somewhere between $10 million and $20 million was owed to Full Tilt by numerous players – including Ivey and Co – but has since stated that the exact figure is $16.5 million, which Tapie has since confirmed is correct.

Tapie – the 36-year-old son of GBT founder Bernard Tapie – is determined that his company will not take on that debt, although he was happy to reveal that a number of unidentified players have agreed to repay their debts to Full Tilt.

However, not long after that piece of news became common knowledge, three-time World Series of Poker (WSOP) bracelet winner Greenstein responded to Dayanim’s claims that the solicitor has not enjoyed a lot of progress in attempting to persuade players to settle up with Full Tilt, while also stating that the majority of the players he has contacted have not expressed a willingness to resolve the matter.

Greenstein – who is well known for his sterling charity work – went to the TwoPlusTwo poker forum to claim that GBT got in touch with him to see if he would be willing to pay GBT directly.

The Poker Hall of Fame legend said that Dayanim offered me the opportunity to pay in installments, so Greenstein would be able to use money owed to me.

The 57-year-old also stated that the GBT solicitor offered me the opportunity to discount my debt if the US players don’t get paid in full, but decided that, while he has never paid less than he owes, he would rather wait until the DoJ (US Department of Justice) establishes a fund for the US players.

Of course, the DoJ – which shut down numerous [geolink href=”https://www.pokernewsreport.com/online-poker-rooms”]poker websites[/geolink], including Full Tilt, Absolute Poker and PokerStars back on Black Friday last April 15 – has to be paid approximately $80 million for GBT to purchase Full Tilt, with the investment firm hoping to have the deal completed by the end of this month.

Dayanim, however, claims that several pros – including Greenstein – have been hindering that sale, although a resolute Greenstein doesn’t believe my debt has any impact on the sale to the Tapie Group, as they have alleged.

But Laurent Tapie has now come out in support of GBT’s lawyer, saying that players such as Greenstein – who he claims say, ‘We will refund if the money goes to the players’ – have misled Full Tilt’s US customers as they know very well that the players will be refunded only if GBT goes all the way with the takeover.

Tapie also said that, for this to happen, it is necessary that the bulk of money owed by the pros returns to Full Tilt or GBT will be forced to make up the shortfall, generating an additional cost to the overall operation that GBT is not willing to take on – especially as the financial position of Full Tilt, as it appears following the audit, is actually worse than expected.

However, he said that GBT will not stop there in their attempts to recover the money, before adding that we will study closely the exact account histories of the 19 pro players who have never repaid their debts owed to the other Full Tilt players.

Tapie believes that poker fans throughout the world – but in particular those former Full Tilt players waiting to recover their funds – should be informed of the reality of the behaviour of some major poker figures who say they are sorry for the situation of Full Tilt players and want to do everything they can to help them get their funds back, blaming the old management, but also refrain from saying how much they have borrowed from Full Tilt, and lost, playing on the site.

The GBT managing director was also at pains to emphasise that these losses represent some of the funds owed to the players who are waiting to be reimbursed, before appearing to take a direct pop at Greenstein when adding that, when you are a poker player, a great player at that, recognised and admired, the basic rule, it seems to me, is to honour your gambling debts.

While almost certainly replying to Greenstein’s frustration and concern, Tapie did admit that GBT was fortunate enough to have immediately received calls from among the 19 players we have attempted to contact and that they are willing to work with us on a repayment plan to clear their debts, and we are already finalising contracts to that effect.

Tapie concluded by saying that he now hopes that those who have not contacted us will do so quickly, to find the same type of solutions, so that the situation does not remain as it is.

It does appear that this story is going to run and run, with no immediate conclusion in sight, so remember to bookmark Poker News Report for all the latest on Full Tilt Poker, Groupe Bernard Tapie, the fallout from Black Friday, and what the US government is planning for the legalisation of internet poker.