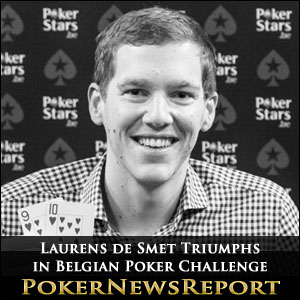 There was an exciting conclusion to the Belgian Poker Challenge at the Casino de Namur this weekend, when chip leader going into the Final Table – Laurens de Smet – won his first live poker tournament on the river of the final hand.

De Smet had been the clear chip leader at the close of play on Day 3, but during the short Day 4 – in which only nine players were eliminated before the final table was set – the challenges started to mount up.

When the final nine players took their seats at the Casino de Namur to fight out the conclusion to the Belgian Poker Challenge, de Smet was only six Big Blinds ahead of his closest challenger – Sean Prendiville from Ireland – with Anthony Rodrigues close behind.

A Tale of Two Cities and Pocket Tens

With blinds of 20,000/40,000 (ante 5,000) when the final table of the Belgian Poker Challenge got underway, Micha Hoedemaker started to ease his way out of danger and build his stack up to a more respectable 585,000 chips, before being eliminated in a cooler of a hand with 10♣ 10♥ < J♥ J♦ against Anthony Rodrigues.

Out in ninth place, Hoedemaker jumped into his car and drove the short distance to the Casino Holland in Venlo, where he late-registered for the Venlo Series of Poker Main Event. At one point Hoedemaker was second in chips at the final table, but yet again pocket Tens let him down – failing to improve against Tobias´ Peters´ pocket Aces.

Back in Namur, Anthony Rodrigues stack was going up and down faster than [insert own gratuitous remark here]. Having sent Hoedemaker off to Venlo, Rodrigues then ran a big proportion of his stack into Salvatore Caligola´s A♠ A♦, before recovering when forcing Kidhir Mengrous off a pot worth almost a million chips, with a big river bet on a board of A♦ 10♦ 9♦ / K♠ / K♦.

Sean Prendiville had also been active, and took the lead in the Belgian Poker Challenge when busting Lennert Van Leemput in eighth. Van Leemput (A♦ K♦) had been the aggressor following the flop of J♦ 10♦ 3♥ and Turn of 9♠, but Prendiville put him all-in before the River (2♣) and rolled over 7♥ 8♥ for the Turned Jack-high straight.

Sean Prendiville extended his lead with 10♦ 6♦ (rivered flush) against Kidhir Mengrous (pocket Kings), and increased his stack to almost 9 million chips after rivering two pairs (A♠ 7♥) in a massive pot against Salvatore Caligola. Mengrous made a good recovery – rivering a flush of his own against Laurens de Smet to double up, before busting Jonathan Abdellatif in seventh A♠ A♦ > 8♥ 8♣ and eliminating Salvatore Caligola in sixth (Kings > Threes ) in consecutive hands.

A long passage of play followed with only one notable event occurring – Laurens de Smet taking a stack of chips from Anthony Rodrigues with a pre-flop shove, after Rodrigues had three-bet to 775,000; and, by the time the five remaining players broke for dinner, the relative chip stacks looked like this:

When the players returned from dinner, the blinds increased to 40,000/80,000 with an ante of 10,000 chips. Ahmed Ibrahim forced both Sean Prendiville and Laurens de Smet off a big pot with a post-river shove, before de Smet returned the favour and won an uncontested one million chip pot from Ibrahim with a river bet of his own.

Kidhir Mengrous´ miraculous recovery came to an abrupt halt when he ran his A♠ Q♠ into the A♦ A♥ of Sean Prendiville and was bust in fifth, and Anthony Rodrigues took a hit to his stack after Prendiville (6♣ 3♣) flopped trip Threes and took three streets of value from him.

However, it was Ahmed Ibrahim who was the next player to leave the table – after almost getting away with an audacious A♦ 8♥ shove against Anthony Rodrigues K♣ J♥, only for Rodrigues to spike the K♥ on the River and eliminate Ibrahim in fourth.

No Quick Conclusion after Three-Way Deal

Remarkably, the three-way deal did not ignite a flurry of all-ins, although victory in a series of smaller pots enabled Laurens de Smet and Anthony Rodrigues to overtake Sean Prendiville in the chip lead and reduce the former chip leader to the shortest-stacked of the three players.

Clearly frustrated, Sean Prendiville shoved for his tournament life with A♣ 8♦ and got a call from Laurens de Smet (A♥ Q♠). Whatever Sean Prendiville felt after the flop of A♦ 3♥ Q♥, he was kind enough to keep it to himself, and left the table graciously in third place when the 9♥ and Q♣ completed the board.

Despite taking a 3:1 chip advantage into the heads-up against Anthony Rodrigues, Laurens de Smet could not put the game to bed and, during the next three-quarters of an hour, Rodrigues came close to levelling the chip counts when his K♦ Q♦ found two pairs to take a 2.8 million chip pot from de Smet.

Rodrigues (paired Six) continued for 775,000 chips and de Smet (chasing a flush draw) again called. Following the Turn card (5♣) the betting followed the same pattern, but for 1,250,000 chips. However, after the 9♦ appeared as River card, Rodrigues checked and was put all-in by Laurens. Rodrigues thought for a moment and then called with his pair of Sixes; however de Smet had rivered a better pair (Nines) and was the Belgian Poker Challenge Champion.