Laurens De Smet leads the Grand Final of the PokerStars Belgian Poker Challenge with only eighteen players remaining in pursuit of the €141,171 first prize. 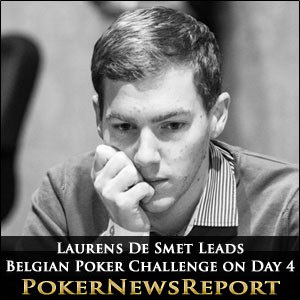 Laurens De Smet leads the Grand Final of the PokerStars Belgian Poker Challenge with only eighteen players remaining in pursuit of the €141,171 first prize.

This weekend sees the conclusion of the PokerStars-sponsored Belgian Poker Challenge at the Casino de Namur, about 40 miles to the south-east of Brussels. After previous legs in Middelkerke and Spa, the €1,500 buy-in Grand Final attracted 470 players over three Day 1s, from which 177 survived into Wednesday´s Day 2.

Play on Day 2 was halted once the 63-player bubble burst and, assured of a €2,433 min-cash, the remaining players – including November Niner Michiel Brummelhuis – returned to the Casino de Namir yesterday to play down to the last eighteen, which will be reduced to a final table of nine when play resumes this afternoon.

Brummelhuis fell in twentieth place, when he got all-in with Seven-Eight on a flop of 9-8-5 and his opponent had Six-Seven for the straight, and we also lost EPT Berlin Cup winner Pieter de Korver (pocket Fours < Anthony Rodrigues´ pocket Tens) and PokerStars Team Online Pro Kurt “iKurre” Maertens (also to Rodrigues – 7♠ 8♠ > J♦ J♥) within the six and half hours of play yesterday.

Laurens De Smet´s jump to the head of the leaderboard came shortly before Brummelhuis´ departure – calling a shove from Vincent Gabel (Ace-Eight) with King-Queen and pairing his King on the Turn – and he is followed at the top of the chip counts by Salvatore Caligola, who doubled up late in the day to take second place one Big Blind ahead of long-time leader Anthony Rodrigues.

Day 4 of the Belgian Poker Challenge Grand Final promises to be a short affair, as only nine players need to be eliminated before the final table is set. The next player out is assured of a €5,170 payday, while the players who survive through to Saturday´s nine-handed climax are guaranteed at least €11,555.

When the eighteen players return to the Casino de Namur this afternoon, blinds will be 12,000/24,000 with a 3,000 ante. The two shortest stacked players Jeroen Vaneenoo (291,000 chips) and Julien Thimister-Colson (289,000 chips) will have their work cut out to catch up with the average chip stack of 1.3 million chips, while those enjoying the healthiest stacks include: