Last Chance to Vote in the 2014 British Poker Awards

Public voting closes today for the 2014 British Poker Awards ahead of a glittering ceremony to be hosted at the Hippodrome in London on February 23rd. 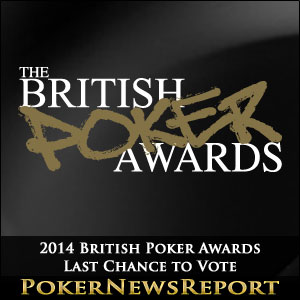 Public voting closes today for the 2014 British Poker Awards ahead of a glittering ceremony to be hosted at the Hippodrome in London on February 23rd.

If you have not yet cast your vote for the 2014 British Poker Awards, today is the last chance to vote for your favourite players, personalities and poker venues. There are fourteen different categories open for the public to vote on, including “Tournament of the Year”, “Performance of the Year” and “Hand of the Year”.

Voting will remain open until midnight at www.thebritishpokerawards.com, after which the votes will be added up and the awards presented at the London Hippodrome on February 23rd – with the exception of the award for “Best Poker Site” which will be announced during the iGaming Affiliate Awards at the beginning of February.

One of the most interesting categories from an observer´s point of view is the new category of “Best Poker Site”. Normally one would expect PokerStars to walk away with the award, but following unpopular changes to its rewards structure and the introduction of a foreign exchange margin, players may choose to vote for a site that has made a positive contribution to poker in the UK.

PokerStars is well represented in other categories – vying for the popular vote in the categories of “Best UK Tournament” for EPT London and “Best Card Room” for PSLive @ The Hippodrome – and a number of their sponsored players are up for awards for their achievements during 2014. However, two former popular stars – Dale Philip and Victoria Coren Mitchell – may well steal some of the limelight away from PokerStars, having left the company in recent months in contentious circumstances.

Who Decides the Other Awards?

Three categories are not open for public voting – “Best Tournament Director” (chosen by a selection of poker professionals), “Players´ Player of the Year” (chosen by former British Poker Awards winners) and “Lifetime Achievement Award” – which is chosen by a panel made up from the events´ sponsors.

The award for “Best Tournament Director” has been won for the past two years by Toby Stone – TD for EPT London – and he is likely to be in the frame again; although possibly facing stiff competition from Simon Trumper who picked up the award for “Best Cardroom Manager” in 2012.

The “Players´ Player of the Year” should be making its way up the Edgware Road to the home of Victoria Coren Mitchell for becoming the first player ever to win two EPT Main Events, and the “Lifetime Achievement Award” could go to Isai Scheinberg who had a very eventful year – selling PokerStars to Amaya Gaming for $4.9 billion before winning the Isle of Man UKIPT High Rollers for a further £13,850!

Vote for Your Favourites – Today

As mentioned above, voting closes at midnight today, so don´t miss out on your opportunity to influence the outcome of the 2014 British Poker Awards. Head over to www.britishpokerawards.com to watch video highlights of last year´s awards ceremony and to cast your votes for your favourite – or most respected – poker players, personalities and venues.

All the results will be available on PokerNewsReport the morning after the event, so make sure you keep up with all the news by following @PokerNewsReport on Twitter.