Last Blow of the Whistle for ISPT Wembley?

Five Day 1A ISPT tournaments are scheduled for what could be a make or break weekend for the ISPT Wembley – but does anyone actually care? Apparently not. 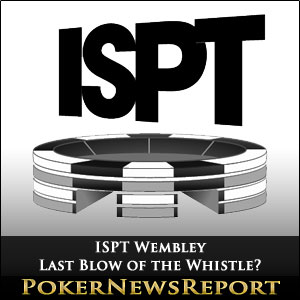 Five Day 1A ISPT tournaments are scheduled for what could be a make or break weekend for the ISPT Wembley – but does anyone actually care? Apparently not.

It seems that only the poker media have any kind of interest in the fate of the International Stadiums Poker Tour, as players grow weary of the event before it has started and ISPT marketing staff are too busy covering up previous “mistakes” to actually promote the event (or are on a beano in Bucharest). So, will the “biggest poker tour ever organised” take place at all? PokerNewsReport took a look at the line-up for this weekend´s scheduled online ISPT Day 1As and gave our verdict on the likely outcome.

Organisers of the ISPT are confident that the well-documented “technical issues” that caused the cancellation of last weekend´s ISPT Day 1A will not re-occur on Sunday – so confident in fact that the site is hosting a $10,000 freeroll on Saturday with 25 seats in the re-scheduled Lock Poker/ISPT Day 1A up for grabs. More than 1,400 players have registered for the Lock Poker/ISPT freeroll (can you imagine what the response would be if Stars had been doing this?), but only one player to date has put their hands in their pocket to play in one of Sunday´s $5.00 “Super Satellites”.

PokerNewsReport Verdict – Day 1A assured of going ahead, but will those who qualify for Day 2 bother turning up at Wembley if they have to pay their own fares?

After struggling for weeks to rouse any enthusiasm for the daily ISPT satellites, Poker770 eventually found enough players/bots to get a €2.00 re-buy up and running on Wednesday. The player/bot who won the satellite may be saving his entry (or her entry – if they have female bots) for a later date, as nobody yet has entered Sunday´s ISPT online Day 1A. Speculation is that a lot of existing Poker 770 players received free entry vouchers for the €2.00 re-buy because, of 198 players who competed on Wednesday, only 13 used their own money for re-buys and just 6 took advantage of the add-on option.

PokerNewsReport Verdict – Day 1A touch and go. The tournament needs 10 entries before it runs and Poker770 might have left it too late to give away free tokens to enough bots!

In Spain, Poker770.es has discounted the buy-in for Sunday´s Day 1A to €250.00 and introduced a feeder “Steps” program to enable players to qualify for ISPT Day 1A from just €1.10. The response has been a big “Non” as – at the time of writing – nobody has entered the target tournament or qualified for the second of the three “steps”. The game on Sunday needs a minimum of ten players, otherwise it will be cancelled.

PokerNewsReport Verdict – Not going to happen. A definite non-event.

The confidence that NetBet has in the International Stadiums Poker Tour is exemplified by their failure to list Days 1B to 1F in the ISPT tournament lobby. NetBet have also reduced the buy-in to Sunday´s ISPT online Day 1A to €250.00 and introduced a feeder “Steps” program to the event, but the response in Italy has been worse than that in Spain. Finding ten players in Italy that want to take part in the ISPT is going to be very difficult.

PokerNewsReport Verdict – There is more chance that Italy will be free of its national debt by Sunday than there will on this event taking place.

Being one of the leading forces behind the International Stadiums Poker Tour, Partouche are doing their best to generate some interest in their online ISPT Day 1A. Three players are already qualified for Sunday´s ISPT online Day 1A through the site´s “Super Satellites”, but the game needs ten players before it can start and, with no Super Satellites scheduled prior to Sunday´s Day 1A and a miniscule database of players which struggles to attract 100 entries for freeroll tournaments, finding seven players to pony up €300.00 is going to be a hard ask.

PokerNewsReport Verdict – Partouche will have to export some of its French players across the border by Sunday for this event to reach its minimum.

ISPT/Lock Poker have paid $10,000 to ensure that there is at least one Day 1A to produce a press release about on Monday, but by Tuesday the ISPT Marketing department could all be looking for a job. The ISPT online Day 1As in Spain, Italy and Belgium are unlikely to take place and Poker770 might just scrape together the ten players it needs for their tournament to run. If so, there could be as many as three players this weekend joining the 13 already qualified for Day 2 of the ISPT at Wembley – just as well that there are side events organised to give the qualifiers something to do on Days 3-6!

What if the ISPT is Cancelled?

Neither Lock Poker or Partouche/MyPok.fr have given any details of what might happen if the unthinkable were to happen and the ISPT was cancelled, but we did receive an email response from Poker770 to say that for the time being there are no reasons why the event should not be held (LOL) but which went on to say should there be any inconveniences, we will not fail to reward the qualifying players.

In addition to the “technical issues” of last weekend (when only two players found it possible to register for the Lock Poker/ISPT online Day 1A while more than 1,000 managed to enter the site´s $100K feature tournament running at the same time), the ISPT Facebook page published an apology allegedly from Lock Poker CEO Jenifer Larson which contained the same message word-for-word (complete with mis-spellings) that was sent in an email dispatched by ISPT “Editorial Manager” Sebastien Sergent just hours before (comments posted on the ISPT Facebook page pointing this out were removed).

And “Where Are They Now”?

Furthermore, one day after the real “biggest poker tour ever organised” (the WSOP) announced the program of events for the 2013 Series, rather than actively promoting the ISPT online Day 1As, the whole ISPT team seem intent on distracting attention away from potentially the most important weekend of their ambitious schedule by focusing on Liz Lieu´s appearance at the PokerFest in Bucharest.

Never mind, If this weekend´s ISPT Day 1As fail as miserably as expected, there are another 30 to take place – or maybe not. The ISPT web site informs visitors that there are a further 35 Day 1As as they have isolated Germany from the rest of Europe (at least one good idea has come out of this fiasco!). Sadly, for the poker media at least, this weekend could see the last blow of the whistle for ISPT Wembley.

One Reply to “Last Blow of the Whistle for ISPT Wembley?”