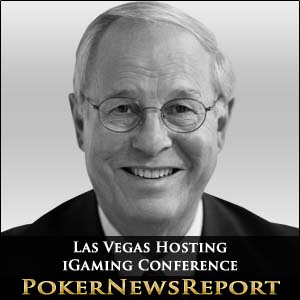 Running from Tuesday through Thursday, conference attendees will take a look at a number of facets of Internet gambling, including the future of online poker. With a handful of states considering online gambling regulations and both Nevada and New Jersey on the brink of passing new legislation, the conference is a must attend event for industry players. Lawmakers from several states that are considering online gaming proposals are expected to be in attendance.

One of the goals of the conference is to introduce North America’s land-based gambling businesses to the way online gambling is operated in other parts of the world.

The keynote address will be delivered by Frank Fahrenkopf, President and CEO of the American Gaming Association. Fahrenkopf will present his views on the prospects of legalized online gambling this year and beyond. He is expected to touch upon both federal and state efforts at regulations, as well as the role state lotteries may play in such a scheme. Fahrenkopf has led the AGA since 1995, but has announced his resignation effective June 30.

Some of the issues to be discussed at the conference include Player and Affiliate Marketing; European Regulatory Models; Monetizing Social Gaming; State Legislation Issues; Interstate Compacts; Internet Lotteries; Tribal Perspectives; and Players Speak. Each of those is a hot topic in online gambling today.

The interstate compact issue is currently being considered by Nevada lawmakers who hope to change their current online poker statute that allows for only intrastate Internet poker. Transitioning free-play players to real-money gamblers is seen as vital to the industry and companies such as Zynga are banking on finding success in monetizing social gaming. The players speak session is designed to allow for greater communication between poker players and industry representatives. Team PokerStars pro Daniel Negreanu is the scheduled panelist representing the voice of the players.