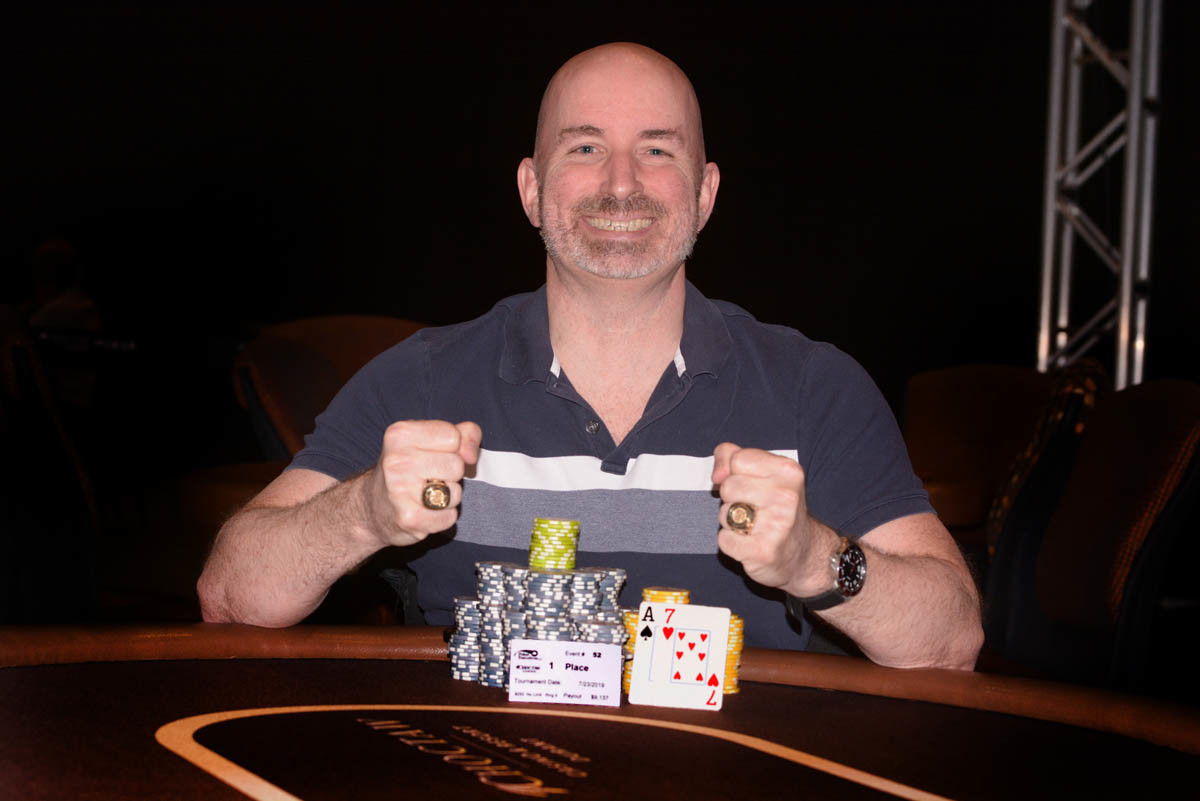 WSOP.com is once again at the center of attention, as it hosts another great online poker tournament called WSOP.com Online Finale Circuit Series. It is a 12-ring event that will run through June 14 and is available for players in Nevada, New Jersey, and Delaware.

The sixth event wrapped up on Monday, and David Larson managed to win one of the biggest poker accolades — a gold ring.

Event #6 offered $100,000 in guaranteed prizes, and it featured a freezeout format. To buy a seat into this event, players had to pay $320, and a total of 419 entries were recorded, surpassing the guaranteed prizes with their buy-ins.

In the end, players had an opportunity to play for a share of the $125,700 prize pool. The top 75 players were paid, but David “TheClubber” Larson won the lion’s share of $30,796. Apart from the hefty prize, he also received an invite to the Global Casino Championship that will take place online this year.

Other popular players who managed to make it to the money list but feel short of reaching the final table are Katie Lindsay, Andrew Kelsall, Alexander Butcher, Josh King, and Shawn Daniels. Moreover, there are popular players who even failed to make money, yet they deserve an honorable mention.

The final table consisted of nine players, and the competition was indeed tough. The first player to hit the rail was “grebnrents,” who won a total of $1,822. They were followed by Ian Steinman, who uses the online nickname “apokerjocker2,” and who won $7,293 for their effort.

Seventh place was reserved for a popular player named Mike Del Vecchio, who uses the nickname “THICC” in the world of online poker. Mike won $4,148.

The player who lost all chips in the fourth position was Daniel “stayactive” Chan, winning a total of $8,044 for their effort.

The last player to hit the rail before heads-up play was Justing “tamaratibles” Young, who won $10,558.

“TheClubber” had to face a player nicknamed “degen97” in the heads-up play. However, “degen97” had to settle for second place for which he won $17,283.

There are several more events to go that are part of the WSOP.com Online Finale Circuit Series. Every event will take place each day until June 14.

However, the most important event that everyone is looking forward to will take place on the last day of the tournament, and that’s the Main Event. It will start at 2 pm PST and will require the buy-in of $525.

It comes with a total of $300,000 in guaranteed prizes, and players will be allowed to re-buy their place back three times.

WSOP is definitely doing a great job at keeping the poker community together at these hard times since the coronavirus caused all casinos and poker rooms throughout the world to close their doors.

By introducing a series of festivals on the web, the World Series of Poker will help players have a summer that they are used to – filled with exciting poker events and gold bracelets. Although many will miss the WSOP in Rio this summer, they can take part in online events while they wait for the postponed tournament that should take place in fall.