Larry Has the ‘Wright’ Stuff for WSOP Event #30 Triumph 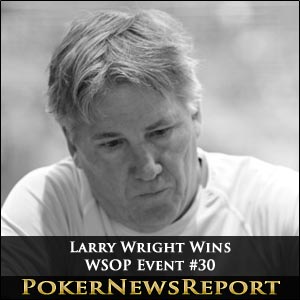 Three fast-paced days at the Rio All-Suite Hotel & Casino came to a conclusion last night, with Wright ultimately defeating Vegas’ Brandon Cantu in their heads-up clash that left the runner-up with a $63,048 pay day from the $384,750 prize pool that was created by the 285-player line-up.

In what was a stellar seven-handed final table, Wright outlasted the likes of New York State’s Andrew Lichtenberger (third for $41,445), Miami’s Michael ‘The Grinder’ Mizrachi (fourth for $28,198), Vegas-based Erick Lindgren (fifth for $19,676) and Rep Porter (sixth for $14,078), of Washington State.

The likeable Wright – who, after retiring from running his own trucking company, sold the firm to his employees for just $1 – had the title in the bag the very first time Cantu moved all-in for his tournament life once the latter had been ground down to only 12 big blinds.

Cantu, on the button, shoved all-in for about 120,000 and, following a few moments, Wright called. Both drew one and Cantu showed 10-9-6-3 draw to be up against Wright’s 9-8-7-3 draw. But Wright hit a four for the victory, with Cantu’s queen meaning nothing.