Larry Franks hit quads not once but twice on his way to victory in Event #11 at the Borgata Poker Open – the $350.00 buy-in Deepest Stack NL Hold´em tournament. 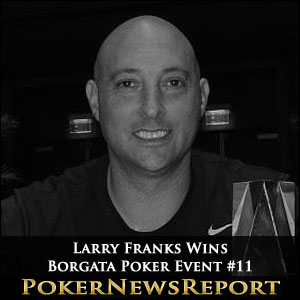 Larry Franks hit quads not once but twice on his way to victory in Event #11 at the Borgata Poker Open – the $350.00 buy-in Deepest Stack NL Hold´em tournament.

There are some days when you know a game of poker is going your way, and yesterday was no exception for Larry Franks, as he twice hit Quads on his way to the final table. However, when he took his seat for the conclusion of the tournament, he was still some way behind chip leader Brian Poliva, who had build a stack in excess of 5 million chips after the dual elimination of Robert Gaudio and Thomas Rybicki in 15th and 16th place respectively.

Are You Sure Buonaguro Means Unlucky?

With blinds at 50,000/100,000 (ante 10,000) when the final ten players took their seats, more than half of the table was looking for a quick double-up, and it was Fabio Buonaguro who had the misfortune to try first and fail in the most unfortunate circumstances.

On a flop of 10♦ 4♣ 5♦, Buonaguro (pocket Fours) got all his chips into the middle against Brian Poliva (10♣ J♣). Buonaguro was looking good to double up, and still ahead when the 10♥ landed on the Turn (Full House > Set of Tens); however the J♥ on the River gave Poliva a better Full House (Tens over Jacks) and Buonaguro was sent to the rail in tenth place.

That Should Read Last Lady Sitting

The demise of the short stacks was complete when Michael Buttacavoli moved all-in for just over a million chips with K♥ J♣. Andrew Klein (pocket Tens) moved over the top with a raise to two million, but folded when Brian Poliva (K♠ K♣) announced he was all-in for 7 million chips. Michael Buttacavoli had the outside chance of a Broadway straight after the flop, but his title hopes evaporated after the Turn and River and he was bust in seventh.

Eddie Bou now assumed the position of shortstack, and eventually he moved in from the button with Q♥ 10♦ for his tournament life. Jason Yniguez (A♦ J♦) made the call and – despite catching a Queen on the flop – Bou was bust when Yniguez paired his Ace on the River.

Despite being forced out of the Poliva/Buttacavoli hand (above), Andrew Klein was still second in chips when Jason Yniguez opened up to 400,000 chips in the next level. Brian Poliva (K-J) called and Klein (pocket Queens) raised to 1.5 million. Yniguez got out of the way, but Poliva made the call and saw the flop of K-9-4. Poliva checked, but Klein moved all-in and got called. As Klein saw Poliva´s flopped pair of Kings, he was heard castigating himself for not going all-in pre-flop and then, to make matters worse, a Jack on the Turn gave Poliva two pairs. The River blanked for Klein, and he was gone in fifth.

Brian Poliva increased his leader further with the elimination of Daniel Marcus in fourth (A♠ 8♥ > A♦ 2♣) and then crippled Jason Yniguez after Yniguez (A♥ 7♥) had confidently put down a huge river bet on a board of A♣ J♥ 5♦ / 3♥ / 4♦. Poliva reluctantly called, but took the hand with A♠ 8♦ to reduce Yniguez to less than 800,000 chips. Those chips went in the very next hand when Yniguez was dealt pocket Queens. Larry Franks (K♦ 7♦) made the call and bust Yniguez in third when a King landed on the flop.