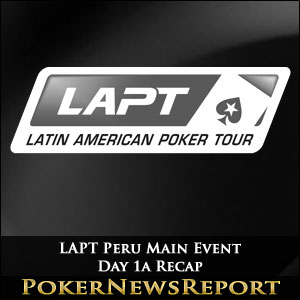 A total of 213 participants took to the felt for Day 1a, which gives some solid hope of the full tournament attracting at least 400 players. About 60 players from the first starting flight made the cut to Day 2 as the fast paced play led to a number of players being eliminated quick.

It was a hometown player who finished the first starting flight on top of the hip ladder, with Peruvian Gabriel Diaz finishing the day with a stack of 224,500 chips. That came despite the participation of a number of notable poker players on Day 1a of the Main Event.

One of those players was none other than two time WSOP Gold Bracelet winner Humberto Brenes. The Costa Rican came into the event as one of the most accomplished players of the field, and finished the day with 83,100 chips to his name.

While that does not make him the chip leader of the event, the 62-year-old’s tremendous experience at the high levels of professional poker still make him a viable threat to all other players at this stage of the game.

Brenes’ son, Roberto Brenes, also entered this event. He finished Day 1a with 67,500 chips as he seeks to claim another event for himself and the Brenes clan.

Bruno Kawauti may not be as notable a name as Brenes, but his fifteenth place finish at the WSOP Main Event last month certainly made him one to watch as he entered Day 1a of the LAPT Peru main Event. Kawauti ended Day 1a with a stack of 91,400, which puts him in a good position in the next phase of the event.

Fabian Ortiz, who finished 17th place in this year’s WSOP Main Event, also entered this tournament. He did not fare as well as Kawauti, however, as he was knocked out of the event before the first starting flight ended.

Day 1b of the LAPT Peru Main Event is set to take place later today at the Atlantic City Casino in Peru’s capital, Lima.