Queens helped Philipp Gruissem to win some significant hands in the EPT Monaco High Rollers event, and were then his winning combination in the heads-up climax. 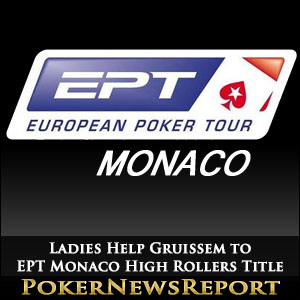 Queens helped Philipp Gruissem to win some significant hands in the EPT Monaco High Rollers event, and were then his winning combination in the heads-up climax.

Philipp Gruissem claimed his second EPT High Rollers victory at the Monte Carlo Bay Hotel on Saturday to add to the two Alpha8 High Rollers events he has won and the WSOP-APAC High Rollers bracelet to move into second place in the all-time German money list – ahead of Tobias Reinkemeier, and just behind 2011 WSOP Main Event winner Pius Heinz.

However, whereas in many of his previous victories, Gruissem has come into the final day well-stacked and in a position to dominate his opponents, he started Day 3 in fourth place amongst a quality field which he would not find so easy to boss:

Pocket Queens were to be the hand which eventually gave Philipp Gruissem victory in the EPT Monaco High Rollers, and they were also the opening combination which were responsible for the first elimination of the day – Pascal Lefrancois running his A♣ 10♦ into Davidi Kitai´s Q♣ Q♦ and failing to find the Ace he needed to stay alive in the tournament.

Almost immediately, Philipp Gruissem was dealt pocket Queens – which improved into a Full House to take 488,000 chips from Davidi Kitai’s chip stack – and Kitai was then knocked from the top of the EPT High Rollers leaderboard when Scott Seiver took another 700,000 chips from him with K♥ K♦.

Davidi Kitai recovered to claim his second elimination of the day – his A♦ Q♣ improving to trip Queens against Chenxiang Miao´s A♠ 10♠ – but it was Philip Gruissem who moved into the lead at the beginning of Level 24 (blinds 20,000/40,000 – ante 5,000) when his A♦ K♠ flopped trip Aces to take a million chips from the American.

Stephen Chidwick´s elimination from the EPT Monaco High Rollers was a two-handed affair – first losing with A♥ 8♥ against John Juanda´s pocket Jacks, and then running 4♣ 4♥ into Scott Seiver´s 10♦ 10♣ a few hands later. Chidwick was joined on the rail almost immediately by Martin Finger, who failed to find the Queen he needed with Q♠ 8♠ to overcome Davidi Kitai´s 9♣ 9♦.

Philipp Gruissem then put space between himself and his opponents with an Ace-high flush over Davidi Kitai´s King-high flush, eliminating Byron Kaverman A♦ A♣ > K♦ Q♦ and knocking out John Juanda 9♠ 7♣ > Q♠ 5♣ when his Seven paired on the flop.

With just three players remaining, Scott Seiver closed the gap on the runaway chip leader A♣ A♦ > K♥ 2♥, but Gruissem again found a Queen when he needed it to bust Davidi Kitai in third place Q♦ J♣ > A♠ 5♠ and take a 7.395 million -v- 3.315 million chip advantage into the heads-up against Scott Seiver.

After Davidi Kitai´s departure, Philipp Gruissem and Scott Seiver agreed a deal that would see them lock up €993,963 and €857,637 respectively, and they also decided to play each hand all-in blind until a winner was determined.

The heads-up subsequently lasted just one hand – Seiver being dealt 2♥ 3♥ and Gruissem getting Q♥ Q♦. Seiver started to get excited when the 4♥ appeared in the window (flop 4♥ 10♠ K♣) and had chances of a wheel straight when the A♣ was dealt on the Turn; but the 8♣ on the River put an end to his comeback hopes, and Philipp Gruissem was the EPT Monaco High Rollers champion with a little help from the ladies.